(CNN) -- The last of six Texas A&M University mariners who went missing in the Gulf of Mexico was found dead Sunday afternoon, the Coast Guard said. The other five crewmates were rescued earlier in the day. 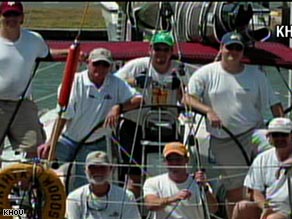 Members of the Texas A&M Offshore Sailing Team are shown in this photo from the team's Web site.

The deceased mariner was identified by the university as Roger Stone, the vessel's second safety officer.

The survivors -- four university students and a safety officer -- told the Coast Guard they were forced off their sailboat after it took on water and capsized.

"The flooding was so fast that the thing flipped over," Coast Guard Capt. William Diehl told CNN.

The sailboat, named Cynthia Woods, was one of about two dozen boats heading from Galveston, Texas, to Veracruz, Mexico, for the annual Veracruz Regatta race, which began on Friday.

Diehl said the boat was well-stocked with safety equipment -- including emergency radio beacons, life rafts and ring buoys -- but the crew could only manage to find four life jackets after the boat tipped over.

Communication with the boat was lost about midnight Friday, and the boat missed its 8 a.m. radio check the next morning, the Coast Guard reported.

A sailboat matching the description of the missing 38-foot boat was found overturned about 5:15 p.m. Saturday, authorities said.

The five survivors were found several hours later about 23 miles south of Freeport, Texas, according to the Coast Guard's press release. They were lifted to safety by a U.S. Coast Guard helicopter around 2 a.m. local time and taken to University of Texas Medical Branch in Galveston for treatment.

The search for the missing crew member involved two Coast Guard helicopters, a Falcon jet, a Marine Corps C-130 -- which has night-vision capabilities -- and the Coast Guard cutter Manowar.

All of those on board the capsized sailboat were experienced sailors, Diehl said.

"They were very well trained," Diehl said. "Obviously [they were] the more senior cadets at the university here, and they had very experienced safety people on board."

When rescuers retrieved the capsized boat's hull, Diehl said the keel was missing.

"That's the part that keeps the sailboat balanced in the water," he said. "And from talking to the survivors this morning, that's where the flooding started for them."

The 725-mile Veracruz regatta began on Friday and boats are expected to arrive in Veracruz on Wednesday and Thursday.

All About U.S. Coast Guard • Gulf of Mexico