(CNN) -- Americans are changing how they shop to combat high food prices. iReporters say they're planning trips to the grocery store with military precision -- arming themselves with coupons and making sure they're in the right shoppers' clubs to get the best deals. 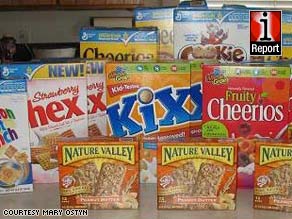 As a "preferred shopper," Mary Ostyn got 27 boxes of cereal and three boxes of granola bars for $30.

Others are looking even closer to home: buying in bulk from the local dairy on behalf of co-workers or just growing food in their yard.

Eric Hubbard of Knoxville, Tennessee, says he pays about twice as much for food as he did in 2007.

"Add to this the difference in the cost of gas," Hubbard says, "and it becomes apparent the problem that American families are facing."
iReport.com: 'Eating and surviving' become way of life

Hubbard, who has a girlfriend and two daughters to consider, said all extraneous activities have been reduced, and he is focusing on only the most important expenses: his home, food and gas.

"It just really makes you step back and take a look back at everything you might have been doing beforehand and see what you have to do to survive."

Now, he's scouring for coupons and deals. Impulse buys, name brands and expensive smoothie drinks are out. Simple, healthful and carefully planned meals are in. Travel and amusements are much more deliberately scheduled, as is Hubbard's life in general.

"It's more of a plan it in the budget kind of thing. It's not as spontaneous," he said. "You know, it's weird. It seems like it was almost an overnight thing but of course it wasn't."

Hubbard has even given up smoking, a change that he says was much-needed anyway and has given him a financial boost.

Simple food cutbacks and reductions in driving when possible are helping him offset the economic conditions, but Hubbard wonders how long it will last.

"What choices are we having to make to survive?" Hubbard asks. "The economy is going to implode upon itself without money."

Shopping local, as a team

Hoping to avoid the overhead of high gas prices that sometimes accompanies food from far-flung places, Marc Plante of Middleton, Massachusetts, does his best to save money by seeking out local food resources.

His family purchases milk from a local producer; the fact that it's antibiotic and growth hormone-free is an added benefit. Plante even started a special delivery service for his co-workers to save them gas money.

"I collect orders for milk, they pay me the cost for the milk, and I buy it and bring it in the next morning, since I pass by the dairy on my way to work," Plante said. "A little effort that helps several people."
iReport.com: Read how Plante's milk delivery grew in popularity

He also turns to community-supported agriculture farms for food, in which he purchases goods from local farmers.

Growing food for a growing family

If you think feeding a family is hard, imagine feeding a family with nine children. Mary Ostyn of Nampa, Idaho, lives this reality, and rising food prices mean she has to be mindful of every penny spent.

Ostyn spends somewhere between $800 and $900 on food per month, higher than housing expenses for many families. She takes high food costs in stride and challenges herself to cook creatively at home.

Her blog chronicles her meal preparation strategies, and she plans to write a book. The family eats out only a couple times per month, plus the occasional dinner date for the parents.

Shopping is a careful choreography aimed at getting the best deal. "I've gotten much more careful about where I buy things," Ostyn said.
iReport.com: How Ostyn finagles food for her family

Ostyn shops around for the cheapest places to buy food and often makes purchases in bulk. Going through several dozen eggs each week, the few cents she saves on each dozen start to add up.

She also turns to gardening to help her to save money on produce, including baby tomatoes.

"If this year's garden is as good as last year's, we'll be picking tomatoes by the wheelbarrow-load by the end of the summer!" Ostyn said.

In times like these, Ostyn says, a wheelbarrow-full of tomatoes makes for a nice load off the budget.