WASHINGTON (CNN) -- On Thursday the Supreme Court ruled 5-4 that detainees have the same rights as anyone else in custody in the United States to contest their detention before a federal judge. 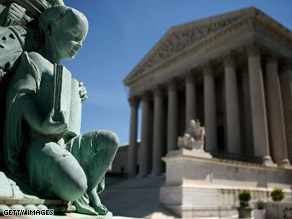 The Supreme Court has ruled that terror suspects have the right to contest their detention in federal court.

It also said the system in place to classify a detainee as an enemy combatant and review those decisions is inadequate.

Arena: The ruling itself does not require the government to release any detainees. But federal judges may decide to do just that. Justice Anthony Kennedy said that federal judges could order some detainees to be released, but said much would depend on security concerns and other circumstances.

Watch President Bush say he disagrees, but will respect the ruling »

Q: Will this affect the trial of high-value detainees like Khalid Sheikh Mohammed, the alleged mastermind of the September 11, 2001, attacks?

Arena: It depends on who you talk to. The government intends to try as many as 80 detainees currently at Guantanamo Bay. Officials flatly said the trials will go ahead as planned.

Attorney General Michael Mukasey said the court's decision does not concern military commission trials. Instead, he argues it addresses the procedures put in place to permit enemy combatants to challenge their detention.

However, defense attorneys say military commissions could be impacted because the ruling holds that detainees are entitled to due process.

Matthew MacLean, who represents the defendant whose case went before the Supreme Court, says that there are a number of provisions in the military commissions act that now may not meet the legal threshold.

For example, prosecutors may introduce so-called "coerced" statements. Those would be statements detainees made during what the government calls "harsh" interrogations. Critics call it torture.

Q: Will this ruling lead to the closing of the detention facility at Guantanamo Bay?

Arena: There is nothing in the ruling that demands closing the facility. But the reason for keeping detainees there in the first place was to house them on foreign soil.

The Bush administration had hoped to keep them out of the reach of U.S. federal courts. The U.S. rents that land from Cuba, and totally controls it, but it is not U.S. sovereign territory. The strategy didn't work.

The Supreme Court for the third time has ruled that regardless of where someone in U.S. military custody is held, they have constitutional rights.

This could take away the political appeal of Guantanamo, which has come under harsh criticism from around the globe.

Q: The president talked about Congress passing new legislation to deal with the ruling. What did he mean?

Arena: Twice before, the Supreme Court ruled that detainees held at Guantanamo Bay can go into civilian court to challenge their detention. Each time Congress, which was then controlled by Republicans, changed the law to try to limit the power of judges to intervene.

Certainly nothing would prevent Congress from trying again, but most political experts don't expect it, especially because Democrats now control the majority.

Most predict it will be up to the next president and next Congress to address this issue. Both political candidates have said they support closing Guantanamo Bay.

Q: So what's the next step?

Arena: Roughly 200 detainees have lawsuits on hold in federal court in Washington. Federal judges plan to meet soon to figure out how they are going to handle those cases and any new motions that are filed. Detainees will not appear in federal courthouses, the legwork will be done by their counsel.

Q: What does the ruling mean for the war on terror?

Arena: Again, that depends on who you ask. Justice Anthony Kennedy acknowledged the terror threat against the U.S. is serious but wrote "the laws and Constitution are designed to survive, and remain in force, in extraordinary times."

Supporters of the decision say the very rights we are fighting for are enshrined in the Constitution and when it is upheld, even for the worst of our enemies, it is a victory for the United States.

But there are many critics who believe the Supreme Court got it wrong. Justice Antonin Scalia said the decision "will make the war harder on us. It will almost certainly cause more Americans to be killed."

The administration has argued the detentions are needed to protect the nation at a dangerous time from al Qaeda and other foreign terrorists. Officials say the treatment and rights extended to those terrorists are unparalleled.