Behind the Scenes: Debating guns in national parks

Editor's note: In our Behind the Scenes series, CNN correspondents share their experiences in covering news and analyze the stories behind the events. 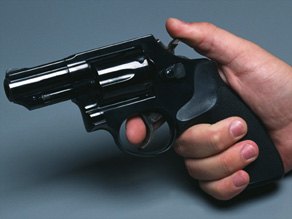 The U.S. Interior Department is considering changing regulations on guns in national parks.

CHANTILLY, Virginia (CNN) -- I'm at the Blue Ridge Arsenal in Chantilly, Virginia, the biggest gun store in northern Virginia. I'm looking at a holster on the hip of Arsenal's John Summer in which a black .22-caliber pistol sits snugly.

I didn't notice it before because Summer is wearing a large plaid shirt, not tucked in, covering his navy blue polo shirt.

But he sweeps the big shirt back and tells me, "I've been to 7-Eleven, Starbucks -- you can go to Applebee's and have dinner."

Summer has a permit to carry a concealed weapon, so he can go to dinner with a gun whenever he wants. He can also wear his gun openly almost any place in Virginia. That's the law.

The next place he may be able to take his loaded, concealed weapon is to a national park. That's because the U.S. Interior Department is considering a proposal from 51 U.S. senators to change its regulations on guns in national parks.

As the law stands, a person can take a gun -- unloaded -- into a national park, but it must be packed away or rendered temporarily inoperable.

The country's 391 national parks, recreation areas, monuments and scenic trails are operated under a single set of regulations by the U.S. Interior Department.

Summer tells me that's a good idea. In some national parks out west "you could flat out dead sprint for an hour and never see another human being -- except maybe a drug dealer," he says, "in which case he's probably got a gun."

Gregory Hylinski, a gun owner from Connecticut visiting a friend, tells me there's another reason for guns in national parks: "It's important for people to be able to protect themselves at all times and in all places even from wild animal attacks."

When Maureen Finnerty hears warning like that she gives an exasperated shrug.

Finnerty and I are walking down a path in the woods not far from her house. She worked for 31 years with the National Park Service, including six years as Associate Director of Park Operations in Washington.

"Right now parks are very safe, they're very safe places to take your family," she tells me. "Our crime statistics are very, very low and you put loaded weapons in people's hands and there's a tremendous possibility that there will be increased violence."

Finnerty knows the National Park Service statistics by heart. The latest data, from 2006, shows 272,623,980 people visited the parks that year. There were 11 cases of homicide or manslaughter, 61 robberies and 35 rapes or attempted rapes.

"Now, could something happen? Of course it could happen, but the chances are extremely, extremely remote," she says.

Finnerty is a member of the Coalition of National Park Service Retirees, which includes a number of former directors. The group is actively lobbying against the change, insisting the current regulations are working.

The proposed change, their Web site says, "could significantly increase the danger to visitors in national parks." It would put wildlife at risk, they claim, and make poaching easier.

But Wayne LaPierre, head of the National Rifle Association, tells me many states allow residents with permits to carry guns in state parks -- why not the federal government?

"They (the states) have changed their firearms laws within the last 15 years to allow good people to protect themselves from bad people and this simply puts federal law in compliance with that change in terms of state law."

Finnerty sees another reason behind the proposal: "I think this is an attempt by the policy people in the [Bush] administration," she says, "to take care of one of their very important constituencies, the National Rifle Association."

A half-hour drive and I am at Great Falls National Park. The water far below at Mather Gorge is white with foam. Half of this park is in Virginia, where gun laws allow people with permits to carry concealed weapons; half is in Maryland, where they do not.

If the regulations are changed, the National Park Service says they will put up signs and run educational outreach to explain the law.

I strike up a conversation with photographer Maria Stenzel. She's watching the gray heron. "We have too many weapons already," she tells me. "We have too much violence all over the country and we don't need to allow them in new places."

Graduate student Nathanael Snow, watching the Potomac River roar downstream, says, "For me, I feel safer if I know that people who are qualified and proficient in handling a weapon have it on them because the bad guys are going to have guns on them anyway."

The public has until the end of June to comment on the proposed change. The Interior Department then will decide.

All About Gun Control