(CNN) -- Some of the $85 million in hurricane relief supplies given away as federal surplus will be sent back to Louisiana and given to nonprofit agencies for distribution, the state's hurricane recovery office said Tuesday. 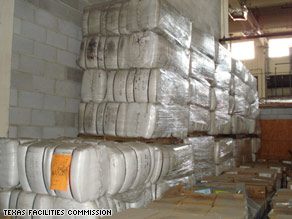 "Today we can report that we have been notified that some of the surplus property has been located in Texas and will be coming to the state of Louisiana for distribution by Unity New Orleans," said Paul Rainwater, the executive director of the Louisiana Recovery Authority.

A CNN investigation revealed last week that FEMA gave away the supplies as government surplus, even though agencies like Unity -- which works to resettle hurricane victims -- were still seeking the kind of supplies given away.

After the disclosure, Rainwater's organization asked the Federal Emergency Management Agency to return some of the extensive stockpiles of household goods that had been purchased as "starter kits" for people living in trailers after Hurricane Katrina.

After CNN reported on the giveaway, other Louisiana officials also asked that the supplies be redirected to the state, which originally passed on them. John Medica, director of Louisiana's Federal Property Assistance Agency, told CNN he was unaware Katrina victims still needed the items because no agency had contacted his office.

Sen. Mary Landrieu of Louisiana, an outspoken critic of FEMA's response to the hurricane, told CNN the supply giveaway was "just a shame."

"It's just another example of the failings of the federal bureaucracy," Landrieu said last week. She wrote Homeland Security Secretary Michael Chertoff to request an explanation.

FEMA Administrator David Paulison on Sunday defended the agency's decision, telling CNN that Louisiana had been offered some of the stockpiles, but that state officials had declined the goods.

Rainwater said state officials "will move to quickly get these supplies in the hands of those who need them."

"Moving forward, we have made it clear that I am to be the point of contact for FEMA when supplies for Katrina and Rita victims are set aside for our state," he said. "We will also be informing nonprofits about how to access such supplies, so that we can all better serve our citizens who are struggling to rebuild their lives."

CNN's Abbie Boudreau and Scott Zamost contributed to this report.