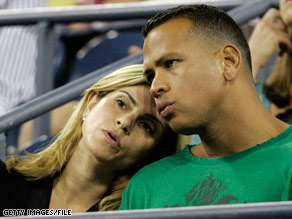 The divorce filing said the marriage is "irretrievably broken because of the husband's extra-marital affairs and other marital misconduct."

"Alex has emotionally abandoned his wife and children and has left her with no choice but to divorce him," the petition said.

Cynthia and Alex Rodriguez have two daughters together, Natasha and Ella.

The split comes less than three months after the birth of the couple's second daughter, according to The Associated Press.

National newspapers and gossip magazines recently have covered the troubled marriage between Alex Rodriguez, one of professional baseball's highest-paid stars, and his wife for weeks, chronicling rumors that both were having affairs.

Reports have linked Alex Rodriguez, nicknamed A-Rod, with pop icon Madonna and Cynthia with rock star Lenny Kravitz. Both Madonna and Kravitz are denying the reports.

Madonna's representative released a statement to CNN on Monday denying the rumors.

"I know Alex Rodriguez through Guy Oseary, who manages both of us. I brought my kids to a Yankee game. I am not romantically involved in any way with Alex," the statement said.

Representatives for Kravitz also released a statement Monday saying that he was helping Cynthia Rodriguez get through the grief of her failed marriage but was not romantically involved with her.

"There is absolutely no affair between Cynthia Rodriguez and myself. This is unequivocally 100% not true," the statement read.

"Cynthia is a friend and is here with the godfather of her baby, who is also Alex's trainer, his wife and their baby girl. She came here to escape from everything happening in New York City. I opened my home to her as a friend, and I find it extremely hurtful that I am now being referred to as an adulterer."

Last year, the slugger was photographed out at night with a former Las Vegas stripper, sparking headlines like "Stray-Rod" in the New York Post.

Rodriguez has been a lightning rod for praise and criticism during his 14-year professional baseball career.

He has been an All-Star many times and has hit more than 500 home runs.

Rodriguez also landed the most lucrative contract in baseball history with a $250 million-plus 10-year salary with the Texas Rangers in 2001, which was extended by the Yankees. He was widely criticized for opting out of that contract during the 2007 World Series. The slugger later inked a new 10-year deal worth $275 million.

The divorce filing also stated that "the husband has the fiscal capacity to continue his high style of living, but the wife does not."

Cynthia Rodriguez asked for alimony and child support in the petition but did not specify a dollar figure.

The divorce petition states that the couple entered into a prenuptial agreement in 2002 and asked for an investigation to determine if the agreement is still valid.

On Sunday, Alex Rodriguez hit his 536th homer, tying Yankee Hall of Famer Mickey Mantle for having the 13th most homers ever.