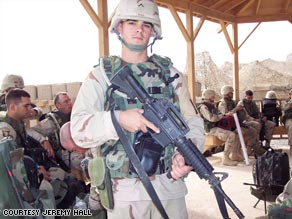 Army Spc. Jeremy Hall, who was raised Baptist but is now an atheist, says the military violated his religious freedom.

Like many Christians, he said grace before dinner and read the Bible before bed. Four years ago when he was deployed to Iraq, he packed his Bible so he would feel closer to God.

He served two tours of duty in Iraq and has a near perfect record. But somewhere between the tours, something changed. Hall, now 23, said he no longer believes in God, fate, luck or anything supernatural.

Hall said he met some atheists who suggested he read the Bible again. After doing so, he said he had so many unanswered questions that he decided to become an atheist.

His sudden lack of faith, he said, cost him his military career and put his life at risk. Hall said his life was threatened by other troops and the military assigned a full-time bodyguard to protect him out of fear for his safety.

In March, Hall filed a federal lawsuit against the U.S. Department of Defense and Secretary of Defense Robert Gates, among others. In the suit, Hall claims his rights to religious freedom under the First Amendment were violated and suggests that the United States military has become a Christian organization.

"I think it's utterly and totally wrong. Unconstitutional," Hall said.

Hall said there is a pattern of discrimination against non-Christians in the military.

Two years ago on Thanksgiving Day, after refusing to pray at his table, Hall said he was told to go sit somewhere else. In another incident, when he was nearly killed during an attack on his Humvee, he said another soldier asked him, "Do you believe in Jesus now?"

Hall isn't seeking compensation in his lawsuit -- just the guarantee of religious freedom in the military. Eventually, Hall was sent home early from Iraq and later returned to Fort Riley in Junction City, Kansas, to complete his tour of duty.

He also said he missed out on promotions because he is an atheist.

"I was told because I can't put my personal beliefs aside and pray with troops I wouldn't make a good leader," Hall said.

Michael Weinstein, a retired senior Air Force officer and founder of the Military Religious Freedom Foundation, is suing along with Hall. Weinstein said he's been contacted by more than 8,000 members of the military, almost all of them complaining of pressure to embrace evangelical Christianity.

"Our Pentagon, our Pentacostalgon, is refusing to realize that when you put the uniform on, there's only one religious faith: patriotism," Weinstein said.

Religious discrimination is a violation of the First Amendment and is also against military policy. The Pentagon refused to discuss specifics of Hall's case -- citing the litigation. But Deputy Undersecretary Bill Carr said complaints of evangelizing are "relatively rare." He also said the Pentagon is not pushing one faith among troops.

"If an atheist chose to follow their convictions, absolutely that's acceptable," said Carr. "And that's a point of religious accommodation in department policy, one may hold whatever faith, or may hold no faith."

Weinstein said he doesn't buy it and points to a promotional video by a group called Christian Embassy. The video, which shows U.S. generals in uniform, was shot inside the Pentagon. The generals were subsequently reprimanded.

Another group, the Officers' Christian Fellowship, has representatives on nearly all military bases worldwide. Its vision, which is spelled out on the organization's Web site, reads, "A spiritually transformed military, with ambassadors for Christ in uniform empowered by the Holy Spirit."

Weinstein has a different interpretation.

"Their purpose is to have Christian officers exercise Biblical leadership to raise up a godly army," he says.

But Carr said the military's position is clear.

"Proselytizing or advancing a religious conviction is not what the nation would have us do and it's not what the military does," Carr said.

The U.S. Justice Department is expected to respond to Hall's lawsuit this week. In the meantime, he continues to work in the military police unit at Fort Riley and plans to leave as soon as his tour of duty expires next year.

All About Religion • U.S. Department of Defense • Armed Forces