HOUSTON, Texas (CNN) -- A comic-book character popular in Mexico for generations has run into a cultural barrier at the border, where Americans see him as a racist caricature. 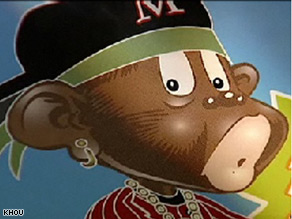 For more than 60 years Mexicans have followed the adventures of "Memin Pinguin." But the dark-skinned Memin's exaggerated features in "Memin for President" came as a shock to Houston, Texas, Wal-Mart shopper Shawnedria McGinty.

She'd never heard of "Memin Pinguin." She bought a Spanish-English dictionary and tried translating but still didn't like what she saw.

"So I asked my boyfriend, does that look like a monkey to you?" she said. "And we went back and forth and he was like, no, that's a black woman," referring to the character's Aunt Jemima-like mother.

"This is absolutely insensitive toward race, in particular the African-American culture, and also people of color," Quannel X said. "This is poking fun at the physical features of an entire people."

But Mexican readers who grew up following the shenanigans of Memin say critics need to look beyond the cover and understand the stories.

"They will bring a smile to their face because we're so fond of that character," said Javier Salas, a Spanish-language talk show host on Chicago radio station WRTO. "We respect him, we love him. And that's why it's so absurd for us to hear complaints from people who don't know, don't understand Memin."

Memin is a poor Cuban-Mexican kid with bug eyes, thick lips and protruding ears. The mischievous and caring boy helps his mother by selling newspapers and shining shoes.

"We grew up reading, learning and educating ourselves with a lot of the topics they always touched on, which was honesty, justice, tolerance. He was a very unique character," Salas said.

Wal-Mart spokesman Lorenzo Lopez said the retailer has instructed stores to remove the books from shelves and discontinue sales.

"We received the customer complaint regarding the book, which we knew was based on a popular cartoon character in Mexico. We looked into it further, and we decided to no longer distribute the book and are in the process of removing the books from the stores."

The store has received no other complaints about Memin, Lopez said.

"We have a wide array of products that we provide to Hispanic customers, but when we looked at this more carefully and given the sensitivity of the topic, we thought it was best to no longer carry the book in our stores," he said.

He did not know how many copies of Memin books the chain had or how long it would take to remove them from displays.

Memin is no stranger to controversy. Three years ago, a series of Mexican stamps honoring Memin ignited an international uproar. The stamps were discontinued because of protests from African-American leaders.

"This is saying we respect and regard the African-American community by making them look like Sambos on a stamp?" the Rev. Al Sharpton said at the time. "This goes over the line."

"Look how they portray his mother, with huge ethnic lips, dark skin, making her look like the big gorilla and him like the little monkey."

But fans of Memin say the valuable lessons of a beloved comic book character tackling real-life problems have been lost in translation.

All About Children's Books • Hispanic and Latino Issues • Racism and Bigotry