Bigfoot hoaxers say it was just 'a big joke'

ATLANTA, Georgia (CNN) -- The two men who claimed to have found the carcass of Bigfoot have surfaced to say: Hey, it was just a joke. 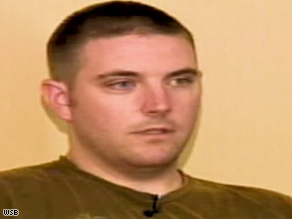 Matt Whitton has been fired from his job as a police officer because of his role in the hoax.

Not everyone is laughing.

In an exclusive interview with CNN affiliate WSB, the two hoaxers -- car salesman Rick Dyer and now-fired police officer Matt Whitton -- said the whole situation began as a joke and then got out of hand.

Whitton chimed in: "All this was a big joke. It got into something way bigger than it was supposed to be."

At a news conference in California last week, the two men had stood by their claims that they had discovered Bigfoot's corpse and had it on ice. Scientific analysis would prove it, they said.

Now the two Georgia men admit that the hairy, icy blob was an Internet-purchased Sasquatch costume stuffed with possum roadkill and slaughterhouse leftovers.

Whitton and Dyer say that when they came up with the hoax, they had no idea it would become a media circus.

Co-hoaxer Whitton agrees: "It started off as some YouTube videos and a Web site. We're all about having fun."

"Fun" isn't exactly how Clayton County Police Chief Jeff Turner sees it. He has kicked Whitton off the police force.

"He lied on national TV," Turner says of Whitton, "so a defense attorney now could say, 'How do we know you're not lying now?' "

Whitton and Dyer had announced that they had found the body of a 7-foot-7-inch, 500-pound half-ape, half-human creature while hiking in the north Georgia mountains in June. They also said they had spotted about three similar living creatures.

Still unclear is how much money Whitton and Dyer got out of the hoax.

Steve Kulls, who maintains the SquatchDetective Web site and hosts a similarly named Internet radio program, first interviewed Dyer on July 28 for the radio program. On August 12, Kulls said, Dyer and Whitton "requested an undisclosed sum of money as an advance, expected from the marketing and promotion."

Two days later, after signing a receipt and counting the money, Dyer and Whitton showed the Searching for Bigfoot team the freezer containing what they claimed was the carcass: "Something appearing large, hairy and frozen in ice," Kulls wrote on the Web site.

It was, as many had suspected, an ape-like costume stuffed with entrails.

After the news conference last week, Dyer and Whitton disappeared from view. The truth came out over the weekend.

In a Web posting this week, Kulls wrote that "action is being instigated against the perpetrators."

The two hoaxers have hired attorney Steve Lister to represent them.

"There have been some threats made to them for both civil and criminal prosecution," Lister said.

The attorney says the Bigfoot incident "got out of hand."

Dyer, asked whether he ever thought that the hoopla had become more than just a joke, implied that everyone should have known it was a hoax.

"Well, we told 10 different stories," he said. "Everyone knew we were lying."