Editor's note: In our Behind the Scenes series, CNN correspondents and producers share their experience in covering news and analyze the stories behind the events. Here, CNN.com's Wayne Drash describes an outpouring of responses since last week's obituary on one of the first liberators of the Buchenwald concentration camp at the end of World War II. 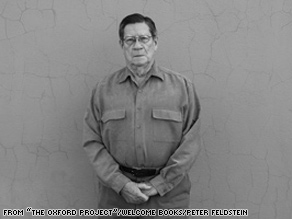 James Hoyt Sr., seen in 2005, was one of the first four U.S. soldiers to find the Buchenwald concentration camp.

ATLANTA, Georgia (CNN) -- The voice on the other end of the phone line spoke in a gentle, hushed tone.

"They put us on what you call the Hitler Highway. On the highway, we saw massacres of people being slaughtered off the highway," Anthony Acevedo said.

"You could see people of all ages, hanging on barbed wire. They had been shot or were being shot at."

He had read about the death of James Hoyt Sr. last week and felt the need to reach out. America had just lost another of its aging World War II heroes.

In April 1945, Hoyt was one of the first four U.S. soldiers to see Germany's Buchenwald concentration camp, beginning the liberation of 21,000 prisoners there.

Acevedo explained he was an American soldier who had been a captive at a satellite camp of Buchenwald, one of only a few hundred U.S. soldiers ever held there. He said he was on a death march about 220 miles from Buchenwald at the time of liberation.

His call was among an outpouring of messages since CNN ran a story on Hoyt's August 11 death at age 83 in his hometown of Oxford, Iowa. Read about his life

One group in Germany said it had tried to reach him for decades to thank him properly. It included a photograph of a small glass memorial near Buchenwald.

The names of the four original liberators -- Capt. Frederic Keffer, Tech. Sgt. Herbert Gottschalk, Sgt. Harry Ward and Hoyt, a private first class -- are on it.

"On April 11, 1945, the village Hottelstedt was the point of departure of the patrol of Combat Team 9, 6th Armored Division, U.S. Third Army, which discovered the concentration camp of Buchenwald," it says.

Others were simply touched by Hoyt's story.

"I hope that this American hero's family reads these comments and knows that his sacrifice has touched people around the country and around the world. In an age of hubris and ego, of warfare and terrorism, this humble man truly exemplifies what I would like to think being an American really stands for," wrote a CNN.com message boarder named Seth. "God bless you, Mr. Hoyt."

Another named Gary said his maternal grandfather lost his entire family in the "flames of Buchenwald and Auschwitz."

"People like Mr. Hoyt are real heroes and truly show the goodness that humans are capable of. This modest, quiet man is now sitting at the right hand of God and he will hold that place of honor for eternity," Gary said.

I was supposed to meet Hoyt next week. He had agreed to tell his story, to tell the world of the atrocities he saw that day in 1945. Unfortunately, Father Time beat me to him, something that's happening all too frequently as World War II veterans enter their 80s and 90s.

There are many lessons to be learned from Hoyt. For one, a nation should never turn its back on its heroes. The documents detailing Hoyt's involvement and his three comrades in the liberation weren't on display at a museum. They were found in a box in an archive.

Imagine: the account of the U.S. military's liberation of Buchenwald stuffed in a box, collecting dust.

See some of the documents »

"I'm the last living of the first four American soldiers who liberated Buchenwald concentration camp," he told Bloom for an upcoming book, "The Oxford Project." "There were thousands of bodies piled high. I saw hearts that had been taken from live people in medical experiments."

Over the weekend, the messages and well-wishes from CNN.com users were read to Hoyt's family. His wife of 59 years, Doris, broke down in tears.

His son, John, said the family has been touched by it all. He said he's even followed blogs of Holocaust deniers after his father's death.

"Some of the dissent was most interesting," he said.

"I'm not saying my dad was a hero to every person in the world, but I'm saying he certainly had a heroic approach and outlook, and definitely went above and beyond a person's call of duty to understand the atrocities of war," the son said.

"They say all's fair in love and war. Well, some of these things weren't so fair, especially if you were a member of an ethnic group or cultural group that didn't suit the people of power. You were scheduled to be obliterated. And that's not OK. That's not what democracy and freedom is all about."

His father suffered from post-traumatic stress disorder up until the day he died; he only began getting help in the 1990s.

"His whole life, he had fitful dreams," John Hoyt said.

As a warrior who had seen the horrors of war, he opposed the invasion of Iraq, his son said.

"Besides all of the horror and disbelief and shocking things that come out of war, there are also the caring, human sides and moral aspects of what we need to learn. Why do we fight this hard in war and put ourselves and others through it if we don't learn from it?"

All About The Holocaust • World War II