Hunkered down iReporter: 'It's a very scary situation' 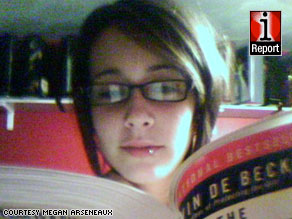 iReporter Megan Arseneaux is hunkered down reading a book to pass the time. "It's a very scary situation."

"As I type this, the wind has actually picked up," the 19-year-old iReporter said in an e-mail Monday morning.

"It's a very scary situation. Every time I look out my window I see a huge tree swaying as the wind takes complete control of it. To pass time I've been napping, reading a book and, of course, watching the news."

Arseneaux and her mother decided to stay put after seeing interstates jammed with traffic over the weekend. They figured they'd be better off boarding up their Harahan home just west of New Orleans instead of following mandatory evacuation orders.

"We were very indecisive about leaving or not, due to the horrific traffic situations," Arseneaux said. "I don't regret it ... yet."

Other iReporters shared similar stories of hunkering down, even though nearly all of the 2 million people in coastal Louisiana and the New Orleans area cleared out ahead of Gustav.

Fewer than 10,000 people were thought to remain in New Orleans, according to Louisiana Gov. Bobby Jindal. New Orleans Mayor Ray Nagin had demanded an evacuation of the city, telling residents Saturday "to get your butts moving out of New Orleans right now." iReport.com: See where the action is

One resident who didn't heed that warning is iReporter Christopher Sarpy, a lifelong New Orleans resident who is riding out the storm with his father and stepmother. He said local officials were just being alarmist to "cover their butts."

Sarpy sent in a video of a barren New Orleans on Sunday night before the storm hit. "It's a complete dead town," he said as he scanned the empty streets.

Watch video of the "ghost" town before Gustav hit »

Sarpy said he evacuated to Dallas, Texas, for Hurricane Katrina and didn't like being so far from his home not knowing what was happening to it. "I live in a really protected part of town. We didn't get an inch of water in our house during Katrina," he said.

Why not leave? "We don't want to deal with coming back in the city with 2 million evacuees," he said. iReport: Are you in Gustav's path? Let us know

About 130 miles west of the city, in Lafayette, iReporter Heather Says was holed up in her home with her husband, sister-in-law and her friend early Monday.

"We're just going to hunker down," she said. "We'll see if in 24 hours I regret that decision."

They have water, food, batteries, flashlights and other emergency supplies. She noted with a laugh that they also had plenty of "beer and wine" handy.

Brian Rowell, 28, of Metairie, an area close to Lake Pontchartrain, is staying home with his wife and another friend. They evacuated for Katrina, but decided that they were "100 times more prepared for this one."

They've got a generator, lots of ice, water, coolers and dry goods.

In Katrina, he says he spent most of the time on the road, and his house stood up fine. He looked at a friend's photos of the area from Katrina and thought he'd be fine riding out Gustav.

"Water came to the doorstep, didn't get inside," he said.

iReporter Dorwin Berrier, the captain of a 110-foot-long supply boat for oil wells in the Gulf, said he's been busy getting people off the oil well in recent days. Monday morning, as the storm slammed the region, he and his vessel were docked in Port Fourchon.

At this point, he said there's not much to do. "Just keep an eye on the engine room, make sure the you're not taking on water and making sure no one gets hurts."