MIAMI, Florida (CNN) -- The storm called Hanna weakened from a hurricane to a tropical storm Tuesday morning as maximum sustained winds eased down to 70 mph, the National Hurricane Center said. 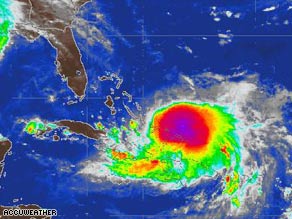 This satellite image from Monday shows Hanna over the southern Bahamas and the Turks and Caicos Islands.

Despite the downgrade, Hanna dropped torrential rain on the eastern Bahamas, the Turks and Caicos Islands, and Haiti. Hurricane warnings remained in effect.

Hanna's path and strength remain uncertain, but the latest forecast map from the National Hurricane Center predicts it still could make landfall as a major hurricane on the southeastern U.S. coast by Friday evening.

Hanna's path early Tuesday appeared to be a "meandering" loop across Turks and Caicos, but atmospheric changes over the western Atlantic are expected to steer the storm northwestward over the next two or three days, according to forecasters.

As of 5 a.m. ET, Hanna was a Category 1 storm on the Saffir-Simpson Hurricane Scale with sustained winds of 80 mph (129 kph) and gusts of up to 100 mph. iReport.com: Watch Hanna lash Turks and Caicos Islands

Three hours later, it was downgraded to a tropical storm as winds fell below the 74 mph threshold for hurricane status. It could return to hurricane status later Tuesday or on Wednesday, forecasters said.

Hanna's line of fire could include the U.S. Atlantic coast from Miami, Florida, to Massachusetts, according to the hurricane center's long-range forecast map. Charleston, South Carolina, appears in the middle of this "cone of uncertainty," with Hanna potentially making landfall there Friday.

"It appears that the center has been meandering," forecasters said.

The history of hurricanes that have been where Hanna is now might argue against its heading toward the southeastern United States. None of the September storms that passed within 200 miles of Hanna's current location has gone there, with most heading into the Gulf of Mexico and others going to New England or Nova Scotia.

Still, forecasters said, "the model guidance is remarkably well clustered" in support of its forecast path for Hanna.

Meanwhile, forecasters were keeping an eye on Tropical Storm Ike, which was gaining strength in the mid-Atlantic and appeared headed for the Bahamas later in the week. It had maximum sustained winds of 50 mph Tuesday morning.

All About Cuba • Hurricane Gustav • Turks and Caicos Islands