Father, son rescued after more than 12 hours in Atlantic

(CNN) -- A father and son who tread water for more than 12 hours in the Atlantic Ocean before being rescued spent much of the time in the dark seas not knowing if the other was alive, authorities said Monday. 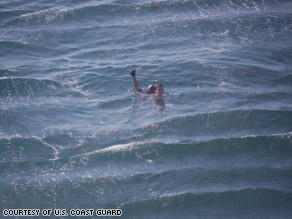 Walter Marino, 46, and his son Chris Marino, who has autism, were swimming in the Ponce Inlet, south of Daytona Beach, Florida, on Saturday when currents pulled the 12-year-old boy out to sea.

His father jumped in to try to save Chris but was also pulled out to sea.

Family members called 911, but by the time rescue units arrived, the father and son could no longer be seen, officials said.

"[We were] floating," Walter Marino told CNN affiliate WKMG-TV after the rescue. "We were floating and just waiting for help to come."

Hoping to find the pair alive, the Coast Guard searched from Saturday night until early Sunday morning before suspending the search because of darkness, Coast Guard officials told CNN.

Coast Guard officials told Lt. j.g. David Birky that he would be part of a backup crew to relieve the team from the night before. Birky told CNN the crew was set to do a search when the sun came up, but received a call while they were en route that a good Samaritan boat found Walter Marino about 7:30 a.m.

Birky, the co-pilot of the crew, told CNN that after the father was found, they began searching that area for his son. Chris Marino was found two hours later, three miles from where his father was rescued.

The Coast Guard lifted the boy into a helicopter, and both father and son were taken to Halifax Medical Center in Daytona Beach, where they were in good condition. Both were treated for dehydration, according to WKMG-TV.

"The Coast Guard rocks," Walter Marino said as he was being transported to the hospital, according to WKMG-TV. "God bless the Coast Guard."

While Walter Marino praised the Coast Guard for its rescue efforts, Birky said the true praise goes to the father and his young son.

"That kid is an amazing kid," Birky said. "To tread water for almost 14 hours, I don't know about you, but I don't think I could do that. They have amazing willpower to be able to do it."