To infinity and beyond: A sparkling survival story

(CNN) -- Walter Marino shouted to his 12-year-old son, Christopher, as he drifted farther away in the Atlantic Ocean. 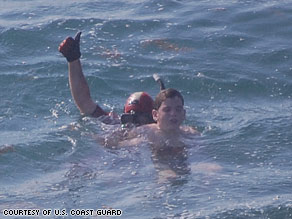 A Coast Guard crew found Christopher three miles away from where his father was rescued.

"To infinity," the father yelled.

"And beyond," Christopher replied.

After a rip current swept the boy and his father out to sea Saturday, darkness fell, and the sound of rescue helicopters and boats grew faint until they were nonexistent.

Despite the danger, Christopher, who has autism, was enjoying himself, his father said. The boy lacks a fear of death because of his autism and finds comfort in the water, Marino told CNN.

Marino finds comfort in his son. Their unique circumstances helped keep them alive for more than 12 hours in the open ocean, Marino said.

"With many kids with autism, the thing that is so dangerous is that they have no concept of fear or fear of death," Marino said. "In this case, though, it perhaps saved him -- that and the fact that water is one of his favorite things. Whenever he goes missing or tries to run away, we can always find him near water ... even at the mall if it is just near a fountain."

See a map of where the father and son were rescued »

Christopher was laughing as the father and son were pulled farther and farther from Ponce Inlet, Florida. As the pair lunged for buoys -- and missed -- Christopher couldn't help but giggle. It was this spirit that helped ground Marino, the father said.

"It was a big entertainment roller coaster for him, that's what got me through it -- because he wasn't freaking out," said Marino, 46.

But after four hours at sea without a life vest, and after it became obvious that rescue operations had ceased for the night, jellyfish began to sting the pair. That began to "freak Christopher out," his father said.

While Christopher is almost nonverbal in his communication, he and his father use catch phases from Disney movies, which the boy loves, to communicate.

After four hours, the currents picked up, and Christopher began to drift from his father's reach. Because of the darkness, they couldn't see each other. So Marino shouted out part of a phrase to his son.

"To infinity," Marino shouted, referencing one of Christopher's favorite lines from the movie "Toy Story."

"And beyond," Christopher shouted back, pumping his fist in the air like movie character Buzz Lightyear.

The call and response went on for a while, with Marino choosing different phrases and Christopher yelling back. But over the course of an hour, Christopher's voice faded until his father couldn't hear him anymore.

"That's when I resigned myself to the fact that he was gone," Marino told CNN, saying he believed his son had been pulled under the water. At the time, Marino said, he thought about giving up, until he thought of his daughter Angela. She had just registered for ballroom dance classes, and he told himself over and over he would live to see her dance.

"I just kept thinking about her and how I was not going to leave her without a brother and her father in the same day -- not on my watch," he told CNN. "It was the visual of her that kept me going."
iReport.com: Do you have an incredible story to share?

Marino used other tricks to keep his mind focused in the 81-degree water. He remembered going to the Ponce Inlet museum, which highlighted a lighthouse. He then set out to use the lighthouse as a guide for himself, so he would know how far he was from shore.

He alternated doing the "doggie paddle" and floating on his back with his ears in the water, the way his son loved to.

He would float on his back and watch the bright stars. He wished on four shooting stars that flew by and used constellations in the sky to know what direction to go if he drifted away.

Watch the Marino family talk about the ordeal with CNN's Dr. Sanjay Gupta »

Under the stars and in the dark Atlantic, he turned to his spirituality, realizing his life was in God's hands. A religious medal rested on his chest.

As morning turned, Marino tried to stay alert for sounds that might mean help was near.

Soon, a group of fishermen pulled him aboard their boat. A flash of light from the medallion had caught the eye of one of the anglers, who shouted at his brother at the helm to stop the boat, one of Marino's rescuers told him.

The first thing Marino asked was if the men had heard anything about his son, but they hadn't.

Marino began to grieve. It had been nearly eight hours since he had last seen his son, and he believed he was gone for good. He wept.

When the U.S. Coast Guard arrived, Marino asked them, too, about Christopher, but they said they had not found him. The Coast Guard crew asked if he wanted to go to the hospital, but he decided to stay on the boat so the search for Christopher wouldn't be disrupted.

But Marino chose not to watch the water as the search went on.

"I chose to be down below, because I didn't want to see them pull up on Christopher being face-down in the water," he said.

So the Coast Guard vessel steamed on. After more than an hour, the boat went full throttle, jolting Marino backward in his space below deck. Suddenly, the boat was idling, and Marino was asked to come topside.

"That was my personal green mile," Marino told CNN, a reference to what some people call the walk on death row from the cell to the execution chamber.

"I took three steps up the green mile to the back of the deck, and they pointed to the helicopter and they said, 'You see that helicopter? It has your son on it, and he is fine,' " Marino recalled a crew member saying.

Marino was so excited he began "kissing all the Coast Guard guys."

The father and son were reunited at the emergency room at Halifax Medical Center in Daytona Beach, where they were treated for dehydration.

"We were both very weak, tired and thirsty," Marino said. "But I reached out and held his hand and could tell from the same sparkle in his eye that he was going to be fine."

While Christopher can't truly communicate what he felt during those hours alone at sea, his father hopes that one day, he will be able to tell him what he felt alone in the Atlantic.

The one thing Marino knows is that his son still loves the water and that the experience hasn't taken away that special comfort from him.

"It may be a while before we go back to a beach," Marino said. "But he still loves the water. He's already gotten back in a pool."