(CNN) -- Cheri Morgan spent about half-an-hour in line at a Houston-area gas station on Thursday before evacuating the city. 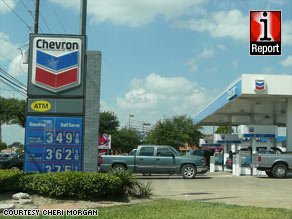 "Everyone was driving crazy and they really need some kind of traffic flow at the gas stations. It's wild," she said. "Everybody's rushing and panicking. I could have stayed, but I thought it was best to just get out of there."

Morgan said it took her about five hours to make the 200 mile drive to San Antonio -- a trip that normally only takes about three hours.

Ike is expected to make landfall on the Gulf Coast of Texas, which is home to many of the country's oil refineries.

That's led to a scramble at gas stations as people try to fill up before the storm hits. iReport.com: Are you in Ike's path?

People were filling up their cars and their gas cans at a Sam's Club in College Station, Texas, iReporter Kyle Norton told CNN.com.

"The lines were a tad ridiculous," the 30-year-old banker said.

Norton said his 2002 Dodge Ram pickup was on empty, so he had no choice but to wait in line for an hour.

Despite the long lines, Norton said gas was about $3.49, which is pretty normal for the area.

He said a friend had to go to four different stations before he could find one that still had regular unleaded.

iReporter Jeremy "Clete" Terrell said the lines also were long at the Costco in Alpharetta, Georgia.

"I was getting gas and realized that everybody else was too," he said.

"It's causing paranoia more than anything," he said adding that people are returning to the gas station to fill up multiple times.

A spokeswoman for the company that runs the Kangaroo Express chain says it's imposed a limit at its 1,660 stores because gas supplies are tight.

Several stations in Ocala, Florida, were limiting sales if they still had gas to sell, iReporter Christine Bailey said.

"This stuff's in the tanks, it's just sitting in the gas stations, they're using this as a windfall event," the retired teacher said.

McIntosh said he heard prices were going up on the news, so he and his wife got gas last night -- along with many other residents of the Toronto suburb.

"A gas station that would normally have three or four cars -- you had 15 cars and you had to line up to get to the pumps," he said.

Rumors that gas would jump to $6 a gallon caused a panic in Sylva, North Carolina. iReport.com: Police called in at mountain gas station

Lines were a half-mile long Thursday night at the stations that stayed open, and police were called in to maintain order, iReporter April Brendle said.

"Supposedly there was a fight at one station," she said.