(CNN) -- When iReporter Carlos Ortega evacuated Galveston's West End last week, there was a road, a row of houses and about 150 feet of sand between his house and the water. Now the surf laps about 30 feet from his door. 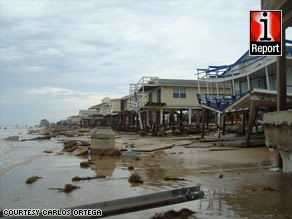 iReporter Carlos Ortega says there's "not an inch that isn't damaged" in his Galveston, Texas, neighborhood.

Hurricane Ike devastated the Texas city over the weekend, and Gov. Rick Perry said it could be weeks before residents could return.

"There's substantial structural damage, obviously ... (no) electrical power," he said. "It's going to be a while."

Ortega, a professor at the University of Houston, and his partner walked about six miles down the beach on Sunday and said there's "not an inch that isn't damaged." iReport.com: See Ortega's home before and after Ike

He said one beachfront house was knocked off its stilts and was lying on the ground like an amusement park funhouse. A dead cow washed in front of another home.

"It was pretty depressing and devastating to see how everything was just torn up," he said. "People's lives and houses were just torn up."

All but two of the houses on the "front row," nearest the beach, in their Bermuda Beach subdivision were destroyed, he said. "You wouldn't know there was a house there."

"The house across the street from us is completely gone, and there's no trace of it," he said.

The first floor of their house is covered with 3 to 4 feet of sand and debris, including huge chunks of asphalt from the road that ran in front of the house.

"We don't keep anything of value down there," he said, because people expect to get high water occasionally.

There were some windows out on the second level, but they did not have much water damage.

Ortega said the storm washed a Jet Ski out of the garage and dumped it about five blocks away. iReport.com: Have you been home after Ike? Share your story

It still worked, Ortega said, but was stuck in the sand.

Ortega rode out the storm at his house in Houston, which also suffered some damage.

"The expectation was that it was going to be like three years ago when the last storm (Rita) came through, and it was so much worse," he said.

iReporter Matteu Erchull stayed on Galveston Island during the storm.

"I think everybody downplayed the severity of the storm, including myself," he said, adding that he didn't regret staying. iReport.com: Ike passes over Galveston iReporter

After the storm, he put on his fishing waders and helped rescue some of his neighbors.

"Some people literally hid in their attics. Right after the storm, you go into these areas, and they were just helpless," the former Eagle Scout said. "They were just waiting."

Nearly 2,000 people who did not evacuate have been rescued along the southeastern Texas coast, said Steve McCraw, director of the Texas Office of Homeland Security.

On Sunday, a Galveston County sheriff's official said three bodies were pulled from storm wreckage in Port Bolivar, bringing to 10 the number of reported deaths in Texas linked to Ike.

Erchull said he got through the storm OK, but most of his stuff was ruined.

"I lost everything. Water rose up to about 10 feet. Got into everything and flooded everything I had," he said.

He said he tried to wash his clothes, but he just couldn't get the smell out.

"The smell was just this really musky moldy wet smell, it's really hard to explain. Imagine leaving your clothes accidentally in the washer for 10 days, it's just disgusting," he said.

Erchull said there's no power on the island, and the National Guard was going door-to-door asking people to leave.

He went to Dallas, where he was up all night telling his friends what had happened and what to expect when they get back.

"It's hard to tell people that there's not much to go back to," he said.