Veteran to soldiers: 'It's OK to be scared'

SAVANNAH, Georgia (CNN) -- Walt Peters knows what it's like to fear for his life. He knows how it feels to board a plane, deploying for combat. He knows the feeling of making it home alive. 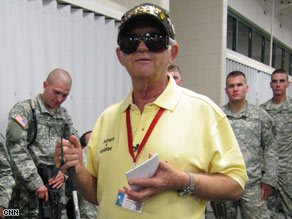 Walt Peters is often among the last people soldiers see as they deploy and the first they see upon their return.

That's why the retired Vietnam veteran has stood outside at Hunter Army Airfield in Savannah, Georgia, for the past four years as a beacon of pride and support, welcoming home returning soldiers and wishing "Godspeed" to those deploying.

"To me, if it wasn't for our soldiers and our veterans, we would not have this beautiful country," says Peters. "These guys are our freedom."

Peters, 64, has been one of the last people that about 20,000 soldiers so far have seen before boarding the plane for the war zone -- and one of the first seen upon return.

No matter what time the soldiers' flights are arriving or departing -- many take place in the middle of the night -- Peters is there to shake their hands and give them a token of support: a small American flag. Some of those flags, Peters says, have gone to Iraq and back.

"When they touch that flag, we're giving them a piece of our country, saying, 'Thank you.'"

Peters is not the only volunteer showing his support at each flight. But he does all of this nearly blind.

He says learned he had chemical diabetes nearly 10 years ago after he was exposed to Agent Orange during his Vietnam tours. He has lost almost all of his sight over the past few years, but that hasn't depleted his dedication to the soldiers.

"When I went to Vietnam on my tours I'd never had this. I had never had nobody say, 'We appreciate your service. We thank you for what you're doing for our freedom,'" Peters says. "When they get on that plane, they're gonna know that this old Vietnam vet cares."

Peters first became involved greeting flights through the Savannah Red Cross in 2004 when a friend from his fraternal Moose Lodge brought him to welcome a returning flight. Peters has since become a flight greeting leader, bringing in and training his own volunteers.

His crew includes Moose members and Vietnam veterans. So many flights come in, Peters says, that it's impossible to be present for all of them. He's worked as many as three flights in one day, in a 26-hour period.

Watch how Peters sends off and greets deploying and returning U.S. soldiers »

Peters and his volunteers arrive two hours before a flight's arrival or departure to set up their tables and brew coffee. He makes sure he walks around and talks with the troops when they come through for processing.

"I'm a combat veteran; the soldiers know I can relate to them," Peters says. "I tell them, 'It's OK to be scared. You stay scared, you stay alive.'"

Peters also talks to the soldiers about the Adopt-A-Soldier program, asking them to fill out a card so a family can "adopt" them and send care packages and necessities to them in Iraq or Afghanistan.

Watch Peters and volunteers interacting with U.S. soldiers before their deployment to Iraq »

Peters says the most important thing is to show the soldiers "the support and the spirit that they need behind them as they step up to get on that plane."

"Sometimes it breaks your heart because you ask yourself, 'Which one of these beautiful people is not coming home?'"

But as long as there are soldiers deploying and returning, Peters says he'll be there.

"I see the roots of our country and our future in every one of these soldiers," he says.