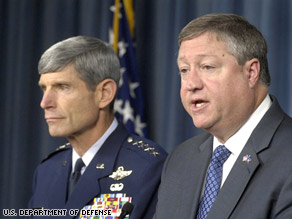 The administrative reprimands were in response to an investigation ordered earlier this year by Secretary of Defense Robert Gates. That probe reviewed the service's intercontinental ballistic missile program after the 2006 shipment became known.

The review team, led by Navy Adm. Kirkland Donald, was charged with determining accountability for the shipment.

The announcement of the accountability findings was made to reporters at a Pentagon news conference Thursday by acting Air Force Secretary Michael Donley and Air Force Chief of Staff Gen. Norton Schwartz.

Both men were involved in deciding what action each officer would face.

"We carefully evaluated the evidence, both that which we derived from the Donald report and other documentation, associated documentation. And we came to the conclusion on what the appropriate sanctions were," according to Schwartz.

"There is a differentiation of sanction involved for these individuals. And some are significantly more serious than others," he said.

Army officials also announced in a written statement that two Army generals were reprimanded for poor logistics in the supply chain, bringing the total number of officers punished to 17.

The Taiwan incident was one of four known nuclear weapon mishaps.

In July, a truck carrying an unarmed missile booster tipped over in North Dakota. The vehicle, which was carrying a Minuteman III rocket booster, tipped on its side on a gravel road about 70 miles southwest of Minot Air Force Base. The crew suffered minor injuries.

That same month, the Air Force announced that three officers fell asleep July 12 while in control of a classified electronic part that contained old launch codes for intercontinental nuclear missiles. It happened during the changing out of electronic parts used to communicate with Minot Air Force Base.

And in August 2007, a B-52 bomber flew from Minot to Louisiana with the crew unaware that six nuclear-tipped missiles were onboard.

Of the six Air Force generals reprimanded for the Taiwan incident, one requested retirement after receiving the most severe administrative punishment, a letter of reprimand, according to an Air Force statement.

Two other generals had already filed for retirement before they received letters of admonishment, according to the statement.

Two other generals receiving less severe letters of admonishment will remain in their command. Because of their level of knowledge and understanding of nuclear weapons and command issues, they are considered vital to their missions, according to Schwartz.

"They have unique skills and capacity to serve. And we came to the conclusion, after a careful evaluation, that we could place our respective trust in their continued service," he said. "They certainly are on notice that there is no room for error here and that, should they abuse this trust, it won't take but about a millisecond to react."

A sixth general received a letter of admonishment but had been reassigned before the report and will remain in his current command.

Of the nine colonels disciplined, two were given letters of reprimand and removed from command.

Three others were given letters of reprimand but left their positions before the review came out and will remain in their current positions.

Three more colonels received letters of admonishment. One was removed of command, one was reassigned before the report and will remain in the new position, and the third will be retained in his current position.

The ninth colonel received counseling for failing to execute effective command oversight and remains in his current position.

Privacy regulations do not allow the military to name officers below the rank of general who receive administrative punishment.

The Air Force provided the following information on the generals involved:

-- Lt. Gen. Kevin J. Sullivan received a letter of reprimand for not adequately addressing logistics policy deficiencies and for not correcting known problems in his position as Air Force deputy chief of staff for logistics, installations and mission support. He was also cited for not exercising effective command oversight while serving as commander of the Ogden Air Logistics Center. He has requested retirement.

-- Lt. Gen. Michael A. Hamel received a letter of admonishment for not effectively exercising responsibility and for not correcting recurring deficiencies while commander of the Space and Missile Systems Center and Air Force Program Executive Officer for Space. He had previously requested retirement.

-- Maj. Gen. Roger W. Burg received a letter of admonishment for not exercising effective command oversight and for not correcting known problems in shipping sensitive components in his current position as commander of 20th Air Force. Donley and Schwartz determined that Burg is needed to restore effective stewardship of the ICBM force, and he will remain in command to continue corrective actions he has initiated.

-- Maj. Gen. Kathleen D. Close received a letter of admonishment for not exercising effective command oversight, for not recognizing weaknesses in management of sensitive components, and for not correcting known problems previously identified problems in her current position as commander of the Ogden Air Logistics Center. Donley and Schwartz reached the same determination on her as on Burg.

-- Brig. Gen. Francis M. Bruno received a letter of admonishment for not exercising proper oversight and for not correcting known problems in his position as director of logistics for Air Force Materiel Command. He previously requested retirement.

-- Brig. Gen. Arthur B. Cameron III received a letter of admonishment for not identifying and correcting deficiencies in operations involving sensitive components, for not ensuring proper control of such components, and for not correcting known problems while he served as commander of the 309th Maintenance Wing. He was routinely reassigned at the normal end of his tour and remains in that position.