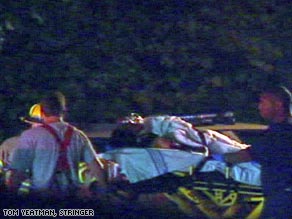 Paramedics carry one of the passengers on a gurney after the Saturday night helicopter crash.

Patient Jordan Wells, 18, survived the crash, according to state police. She was at a hospital in critical condition, Sheridan said.

Federal and state authorities were trying to determine what caused the crash, Sheridan said.

The helicopter was on its way to Prince George's Hospital with Younger and Wells, who had been critically injured in a Charles County, Maryland, car crash. The helicopter went down in a wooded area on a park trail in the Capitol Heights/Ritchie communities, Sheridan said.

Sheridan characterized the crash as the worst in the history of the police department.

"This is a devastating tragedy," he said. "We have had crashes before but never with four dead. This is the worst."

The pilot radioed that he was going back to Andrews Air Force Base to avoid bad weather just before midnight, Brady said. Two ambulances were sent to Andrews to meet the helicopter and carry the patients to the trauma center.

But radio contact with the helicopter was lost and the wreckage was found after a two-hour search, authorities said.

All About Prince George's County