Could you pass the new citizenship test?

CLARKSTON, Georgia (CNN) -- James Yarsiah listened to his college classmates discuss whether the civics component of the new U.S. naturalization test -- which prospective citizens can start taking Wednesday -- is more challenging than its predecessor. 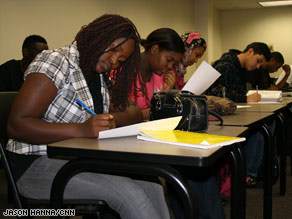 Students in a government course at Georgia Perimeter College examine the old and new citizenship tests.

Is a question with a range of acceptable answers, such as the new "What is one reason colonists came to America?" preferable to the old "Why did the Pilgrims come to America?"

Yarsiah, a Liberia native who plans to seek U.S. citizenship, waited until the end of the discussion at Georgia Perimeter College to pipe up.

"I'm just going to study for it, take the test and move on," the 20-year-old said, drawing classmates' laughter. "The new one is not that much harder because of concepts and stuff. You still have to study."

But some in Professor Robert King's American Government class, which examined sample questions of the old and the new civics tests at CNN.com's request Monday, had other opinions on how immigrants who weren't raised to speak English -- or even U.S. citizens -- might fare on the new version.

Many preferred the new test, which the government says includes more meaningful questions, such as those that involve a concept of, or critical thinking about, civics or history.

The new civics list, a pool of 100 possible questions for a test of up to 10, omits the old "How many stars are there on our flag?" and "Name the amendments that guarantee or address voting rights." Taking their place are questions like: "There are four amendments to the Constitution about who can vote. Describe one of them," and "What is one responsibility that is only for United States citizens?"

"It's more about really knowing something that you would get from living here ... rather than just reading about it and being a bookworm," said Joey Hornbuckle, 17, of Newnan, Georgia.

Others, including Ethiopia native Anteneh Workneh, addressed an issue that immigrant advocates have raised: Conceptual questions and answers might require a higher level of education and greater English-language dexterity.

He compared one question found on both tests -- "The House of Representatives has how many voting members?" -- with a new question: "Why do some states have more representatives?"

"The first one is a fact. They're going to quote the number: 435," Workneh, 25, said. "But the other one, you have to know more definitions of the words."

But classmate Simon Reiter said if applicants "don't ... know it, that doesn't mean they should get a passing grade."

"I think overall [the test is good] because it seems like it would make them more involved in the U.S. community," Reiter, 19, said.

The old test will take a year to vanish. Anyone who applied for naturalization by Tuesday can choose either test if they take it by October 1, 2009. After that, only the new test will be given, according to U.S. Citizenship and Immigration Services.

Anyone applying from Wednesday onward cannot take the old test.

Like the new civics exam, the old draws from a pool of more than 95 questions. Both ask applicants up to 10 questions, with applicants needing six correct to pass.

The test is not multiple-choice; applicants must know the answer directly and say it.

Both exams, given orally, are part of a larger naturalization test in which applicants also take English reading and writing exams. The whole test is one of the steps permanent legal residents take to be naturalized.

USCIS was on pace to receive more than 500,000 citizenship applications for a 12-month period starting in October 2007. An applicant's $675 fee allows for a test and one re-test, if necessary.

Some questions on the old civics test were kept. But many added items require applicants to learn more about U.S. history and citizenship, USCIS says.

"What we're against is rote memorization of trivial and arbitrary facts that have no impact in a citizen's life or do not cover fundamental concepts of American democracy," Alfonso Aguilar, chief of USCIS's citizenship office, said last year.

USCIS, which posts the questions, answers and study materials online, also says the new test isn't harder and that the English necessary is at a high-beginning level. Adult educators and community organizations helped with piloting and revisions, USCIS says.

Before the questions were unveiled last year, more than 6,000 citizenship-seekers volunteered to take a pilot. More than 92 percent passed on the first try -- better than the 84 percent first-try passing rate for the regular test at the time, USCIS says.

Flavia Jimenez of the New Americans Initiative, a citizenship program of the Illinois Coalition for Immigrant and Refugee Rights, said it was important to note the pilot takers were volunteers.

"Any individual who would self-select to take an exam is by definition better capable and probably educated enough to do this without help," Jimenez, NAI's program director, said.

She said some new questions put people with lower levels of education and English skills at a disadvantage. Community groups that help immigrants prepare may need to explain certain concepts in their native languages and then work on English to express the answer, she said.

She said preparing some applicants for the concepts will require more time, straining under-resourced English and civics programs.

Alice Barrett, who instructs a citizenship class in Chamblee, Georgia, said the old test appears more straightforward but the new study materials will be helpful. She taught the old test through Tuesday's deadline; she'll switch when a new class cycle starts.

"We have been encouraging students to sign up for the old test" because the nonprofit that runs the class was still digesting the new material, she said.

Sue Colussy, program director for immigration services at Catholic Charities Atlanta, said she understood the government's argument, but the more conceptual test will be more difficult, especially for the elderly.

"This new test is just going to widen that gap between the person who passes the test and the average American, who doesn't have a clue," she said.