WASHINGTON (CNN) -- A federal appeals court Wednesday blocked the planned release of 17 Chinese Muslims from the U.S. military facility at Guantanamo Bay, Cuba, granting the government more time to argue against the plan. 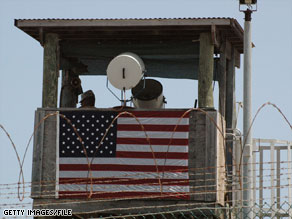 A guard looks from a tower at the military facility at Guantanamo Bay, Cuba.

A three-judge panel of the U.S. Court of Appeals granted the Bush administration's motion for an emergency stay and set up a schedule for briefings over the next week to address the complicated issues of the case.

A day earlier, a lower court in Washington ruled the detainees -- who had been in U.S. custody for nearly seven years -- were to be brought to the court by 10 a.m. Friday so a judge could set them free.

In an emergency motion filed overnight, Justice Department attorneys said only the executive branch -- not the courts -- may decide whether to admit an alien into the United States.

The government further argued the lower court's decision to free the detainees "threatens serious harm to the interests of the United States and its citizens by mandating that the government release in the nation's capital 17 individuals who engaged in weapons training at a military training camp."

The appeals court's move will halt the release for at least a week.

"We are pleased that the Court of Appeals granted our request for a temporary stay, and we look forward to presenting our case," Justice Department spokesman Brian Roehrkasse said.

The detainees, ethnic Uighurs from a mostly Muslim autonomous region in western China, have been in U.S. custody since 2001. They fled Afghanistan soon after the U.S.-led bombing campaign began that year, and Pakistani authorities turned them over to the U.S. military.

The United States said the 17 had engaged in weapons training at an Afghan military training camp. The United States determined in 2004 that the 17 Uighurs were not enemy combatants, but it kept them at Guantanamo while trying to persuade other countries to resettle them.

Officials said they were not returned to China because of credible fears that they could be persecuted if returned.

U.S. government lawyers say the law forbids the detainees' entry into the United States, but efforts to find another nation willing to accept them have been unsuccessful.

The U.S. district judge who ordered the detainees' freedom Tuesday had planned to hold a hearing to determine under what conditions they would be settled in the United States.

Wells Dixon, an attorney for the 17, told legal colleagues Wednesday night that he dreaded having to tell his clients Thursday about the Court of Appeals decision.

"I don't know how I can explain to them that now their release has been postponed indefinitely," Wells said.

Another attorney from the Center for Constitutional Rights in New York expressed hope that the prisoners would still be released in the not-too-distant future.

"We remain hopeful that justice still means something in this country and that the judge's release order will eventually stand," said Emi MacLean.