Hundreds of Navy fighter aircraft to be inspected for cracks

WASHINGTON (CNN) -- The U.S. Navy is having hundreds of its older F/A-18 fighter jets inspected, including some flying operations over Afghanistan, for cracks in part of a wing assembly, officials said Friday. 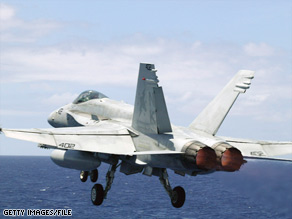 Inspectors looking at F/A-18 fighter jets have found 15 with stress crack problems on the wings.

Some 636 F/A-18 A through D model Hornets in both the Navy and the Marine Corps are being inspected for stress cracks on a hinge connecting the aileron to the flaps on the back side of the wings, according to Navy spokesmen.

Inspectors started looking at the planes Thursday and have found 15 aircrafts with the problem. A panel on the wing can be swapped out with a new one to get rid of the problem.

The Navy is still looking at the hinge in question to see whether the problem is severe enough to ground the Hornets and come up for a permanent fix for the hinge.

Navy officials said there are no immediate plans to ground the 636 planes.

This month, a post-flight inspection of one F/A-18 found a crack, and it was determined to be systemic enough to warrant an inspection of the older F/A-18s, according to Navy officials.

The Navy also flies the Super Hornet, a newer version of the F/A-18. That plane is not part of this inspection.

Navy flight operations around the world will not be interrupted because of the inspections, officials said.

All About U.S. Navy