QUANTICO, Virginia (CNN) -- Motorcycle accidents have killed more Marines in the past 12 months than enemy fire in Iraq, a rate that's so alarming, it has prompted top brass to call a meeting to address the issue, officials say. 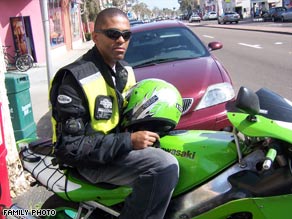 Despite crashes, Gunnery Sgt. Art Tucker rides a sport motorcycle. "I enjoy it. ... It relaxes me," he says.

Twenty-five Marines have died in motorcycle crashes since November -- all but one of them involving sport bikes that can reach speeds of well over 100 mph, according to Marine officials. In that same period, 20 Marines have been killed in action in Iraq.

The 25 deaths are the highest motorcycle death toll ever for the Marine Corps.

Gen. James Amos, the assistant commandant of the Marine Corps, told CNN that commanders are trying to drill down on what "we need to do to help our Marines survive on these sport bikes."

"The Marines are very serious about it," he said.

Watch these aren't your father's Harleys »

Marine Gunnery Sgt. Art Tucker knows all too well about the dangers of sport bikes. An owner of a Kawasaki Ninja, Tucker has had two crashes, and the second one nearly killed him.

"I sustained a broken collar bone; I tore the shoulder out of the socket; I tore three ligaments in the shoulder, the rotator cuff; I broke three vertebrae," said Tucker, a drill instructor for new officers.

Amos said he and other top Marine officials will spend half the day Monday "focusing on nothing but motorcycle issues." The commandant of the Marine Corps, Gen. James Conway, and other senior leadership will attend the meeting at the Quantico, Virginia, Marine base, he said.

The Marines have taken some measures. The Marine Corps has had a long-standing policy for all Marines who ride motorcycles to take a mandatory basic riding course. More recently, it added a second training course specifically designed to train Marines who ride sport bikes.

Any Marine caught riding, even on leave, without going through the training courses faces Marine Corps punishment, officials say.

On a recent day at the Quantico training track, Marines whizzed by on their bikes.

"I think the basic rider course has been great," said Cpl. Austin Oakley. "Here, they put you in situations you want to be wary of out in that open road."

Oakley said he recently returned to the United States from Japan, and he immediately jumped at the chance to buy a sport bike. He said it's not uncommon for Marines to have motorcycle clubs within their units.

"We'll go out on rides together. Fridays for lunchtime, we'll all meet up and go to lunch," Oakley said. "When I get on my motorcycle, it's me and the motorcycle. I don't need to go fast. I don't need to do anything like that. It's just being free."

The rise in motorcycle deaths isn't confined to Marines. The Navy says it's had 33 deaths on motorcycles over the past 12 months, a 65 percent jump from the previous time period. And authorities say motorcycle deaths have been a problem in the civilian world, too.

Military officials say they're not sure why the deaths are on the rise. They initially believed that the accidents might involve mostly young Marines and sailors about 18 or 19 years old. But Navy statistics show that five of the victims were 25, the most prevalent of any age involved in the crashes. And two 40-year-old sailors were killed in motorcycle crashes.

Amos said the Marines have seen a similar trend.

But he says the new training seems to be working: Of the 300 young men and women who have gone through the sport-bike course, only three have had accidents.

The safety course instructors said some Marines who go through the training decide the sport bike is not for them.

But even some Marines who've survived past crashes still want to ride again, even after they get the new training.

"I enjoy it," said Tucker. "I can actually get on my motorcycle and ride, and it's just like if I were to do bowling or rock climbing or scuba diving. It's something for me. It relaxes me."