Behind the Scenes: Saluting a female general

In our Behind the Scenes series, CNN correspondents share their experiences in covering news and analyze the stories behind the events. CNN Senior Pentagon Correspondent Jamie McIntyre reflects on the historic promotion of Gen. Ann Dunwoody, the first woman to achieve Army's highest rank. 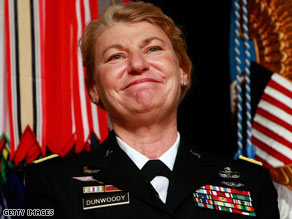 (CNN) -- Watching Army Chief of Staff George Casey swear in his newest fellow four star -- the first woman to achieve the Army's highest rank -- it was hard not to feel something truly historic was happening before your eyes.

The cavernous Pentagon auditorium was packed with a constellation of multistarred senior officers, mostly men. The mood was festive. There were broad smiles everywhere.

It was both a sign of how far women have come in the U.S. military and a reminder that women are still not full equals to their brothers-in-arms.

"It's taken a long time, probably longer than it should have," Casey admitted in his congratulatory remarks.

Gen. Ann Dunwoody was beaming as Casey and her husband pinned the four stars on each of her shoulders, stars that carry with them the heavy burden of a "historic first."

"I didn't appreciate the enormity of the events until tidal waves of cards, letters, and e-mails started coming my way," Dunwoody said.

"And I've heard from men and women, from every branch of service...from moms and dads who see this promotion as a beacon of hope for their own daughters."

One such letter came from Master Sgt. Michael Bergener, who served with Dunwoody at Fort Bragg.

"Now, you get to pin on our nation's highest military rank, and I get to tell my 5- and 7-year-old daughters that they really can be anything that they want to be, even a general in the United States Army."

Technically, women are still barred by Congress from serving in direct ground combat -- a distinction that seems increasingly disconnected from the reality of modern warfare.

Still, I couldn't help think how much attitudes had changed from when I first reported on the women in combat debate in 1993.

Bill Clinton was president, and Defense Secretary Les Aspin had ordered an end to the ban on women flying combat aircraft.

The military saluted smartly and began trumpeting the breakthrough, even as some senior officers harbored deep reservations.

I remember questioning the Air Force Chief of Staff Gen. Tony McPeak, who made no secret of his personal opposition to allowing women in the cockpits of his fighter jets, about how he felt.

"I'm comfortable with it, and there's always the small chance I was wrong," McPeak said.

It sounded like self-deprecating humor, but anyone who knew Tony McPeak knew he really did think there was only a small chance he was wrong.

At the time -- in the early '90s, after Desert Storm -- the prevailing thought was summed up by Kate O'Beirne, a former member of the Presidential Commission on Women in Combat.

"I do not believe the American public is ready to see America's daughters and sisters being paraded in downtown Baghdad as POWs. And we know that our pilots run that risk," she said at the time.

That's no longer a theoretical question. The fact is American women have been fighting and dying alongside men in both Iraq and Afghanistan -- two wars with no front lines.

So far, 115 women have laid down their lives for their country in those wars.

But the reason it took so long for a woman to earn four stars is because most full generals prove their mettle in combat.

Dunwoody, though she served the Airborne, rose through the ranks of the Army Materiel Command.

"History will no doubt take note of her achievement in breaking through this final brass ceiling to pin on a fourth star," Defense Secretary Robert Gates said at Dunwoody's promotion ceremony, "But she would rather be known and remembered first and foremost as a U.S. Army soldier."

Dunwoody has a proud military history. A Dunwoody has fought in every American war since the Revolution.

Her great-grandfather, Brig. Gen. Henry Harrison Chase Dunwoody, was the chief signal officer in Cuba from 1898 to 1901.

Her father, Hal Dunwoody, is a veteran of three wars -- World War II, Korea and Vietnam.

But it is the younger generation of Dunwoodys who are a living testament to the strides woman have made. Her sister Sue was the third female helicopter pilot in the Army, and her niece Jenny is an Air Force A-10 pilot who recently returned from flying combat missions in Afghanistan.

"If anyone is worried about the next generation of warriors, fear not," says Dunwoody. "The bench is loaded with talented sailors, airmen, soldiers, and Marines. And while I know I may be the first woman to achieve this honor, I know with certainty I won't be the last."