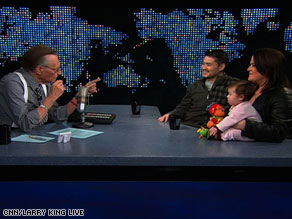 Thomas' new book is titled "Labor of Love: The Story of One Man's Extraordinary Pregnancy."

The following is an edited transcript of the interview.

Larry King: Thomas and Nancy, welcome. Congratulations. How is it going?

King: Are you surprised at all of this attention, or did you expect it?

Thomas: Honestly, we are quite surprised. We naively thought that we were going to be able to get away with me giving birth without anyone knowing.

King: How did you two meet?

King: How long have you been together?

Thomas: Yes, going on 11. We've been married for going on six.

King: Obviously, you look like a man. You are a man. Did you go through surgeries?

King: So you are a man to yourself?

King: How did the idea come about that he/she should get pregnant?

Nancy: Well, we both wanted to start a family. I had a hysterectomy. So we thought about adopting and all of these other options, but who better to carry our baby than him?

King: You did it? The donor denotes the sperm?

Nancy: Right. We ordered the sperm and it came to our house. I put it in a syringe without a needle.

King: And injected it?

King: So you never had any work done in the lower parts that would change that part?

Thomas: Just from what testosterone does naturally.

King: Did he get pregnant right out of the box?

King: He's pregnant now, right? How did you know how to do that?

King: Why didn't you adopt?

Thomas: That's a viable option and we did consider it. I have a very real need to pass down my genes, so we were going to try that first and then look into surrogacy. But we would have had a lot of problems with surrogacy, because we would need fertility endocrinologists to help out.

Nancy: We wanted to have our baby.

Thomas: Wow. It's an experience you can't quite -- you just can't describe it to someone else who hasn't gone through it. It's a life-changing experience for sure.

King: Did you run into legal problems at all?

Thomas: We have actually with her birth certificate.

King: What does it say?

Thomas: Well, I filled it out as me father, Nancy mother, and they changed it last minute, and they put her as father and me as mother. And then they changed it again and put us as parents. That's fine and dandy, but we don't have a domestic partnership. We're not a same-sex marriage. We're legal man and wife.

Thomas: Yes. One part of the government recognizes me as male and, now with our baby's birth certificate, there's a conflict. So we're really concerned that it's going to jeopardize our future.

King: What would happen if, God forbid, you pass away? Would somebody fight over this baby?

Thomas: It's very likely. That's what I'm very afraid of and that's why we need help. We need an attorney to help us make it right.

King: When you met, were you -- what kind of couple were you?

King: What I meant was did you consider yourself gay?

Thomas: No. We -- I lived my life as a woman at that point. Legally, I was female. But inside I still felt male. So the way other people perceived us, they saw us as a lesbian couple.

King: Do you feel gay?

King: So you feel you're married to a man?

Nancy: Yes. Even when he was pregnant, he was still a man to me.

King: What kind of birth was it?

Thomas: It was natural birth.

Thomas: No, it was rumored that it was. But it wasn't.

King: You looking forward to the next one? How far along are you now?

Thomas: I am ten weeks.

King: Where did you learn how to do this? From the Internet, you said, right. You can't have the normal kind of intercourse, right?

Nancy: Not to make a baby.

Thomas: Because of hormones, my -- my clitoris has enlarged and it looks like a penis. I can have intercourse with my wife.

King: That's fascinating to me. I didn't know that. So you have a clitoris that looks likes a penis so it can fit into having love relations?

King: Is this the end of the baby sphere? This baby going to be the last?

Nancy: We don't know yet. We haven't decided.

King: The two of you, really, I think you're terrific. I think what you've done is not the easiest thing in the world and especially to come forward. You have a beautiful little daughter. I wish you nothing but the best. All right. That's Thomas Beatie and his wife, Nancy Beatie, and the book is "Labor of Love, the Story of One Man's Extraordinary Pregnancy." That it is. Amazing story.