(CNN) -- Gas prices dropped nearly 33 cents in the past two weeks, dipping below $2 for the first time since March 2005, a national survey said Sunday. 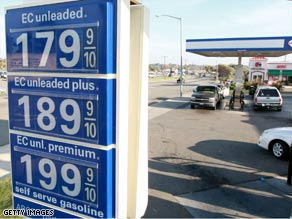 This station in Rio Vista, California, had gas prices below $2 on November 19.

The average price of self-serve, unleaded gasoline on Friday in the United States was $1.97, said Trilby Lundberg, publisher of the Lundberg Survey. The last time the price was below $2 was on March 4, 2005, she said.

The all-time high average was $4.11, set on July 11, according to Lundberg, and prices have been dropping ever since.

"The rate of decline has slowed somewhat, but it is still dramatic at 33 cents in two weeks," she said.

Diesel prices averaged $2.93 on Friday, slumping under $3 for the first time since September 2007, she said.

Lundberg attributed the price reductions to a drop in crude oil prices and demand, and also because of low refining margins.

"Crude oil remains [the] main driver," for the decline, she said, noting that crude oil futures settled on Friday below $50.

Demand is always low in November, she said, but the weakening economy is reducing it further.

However, Lundberg said that if crude oil prices do not fall further, "then the end of this [gasoline] price crash is either here or near."

The Lundberg Survey is based on responses from more than 5,000 service stations nationwide.

Here are average prices in other cities: