(CNN) -- The powerful Service Employees International Union has decided that, because of the $700 billion financial-system bailout, it wants to organize bank workers. 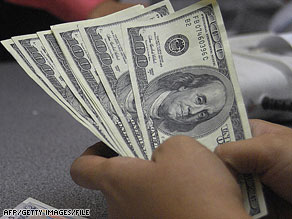 Banks that get taxpayer money need to "ensure their workers have a voice," a union spokeswoman says.

In an e-mail dated November 12 and obtained exclusively by CNN, a member of SEIU's Private Equity Project outlined initial discussions to organize bank workers "since the banking industry is now being infused with billions of taxpayer dollars."

The e-mail was written by SEIU's Inga Skippings to the director of the Washington office of the Association of Community Organizing for Reform Now (ACORN), a longtime ally and partner of the union.

"We need to get a handle on who these workers are, working conditions, etc.," Skippings wrote.

"Do you have ACORN members who work for banks or Freddie Mac/Fannie Mae? Is there anyway [sic] you could check? The banks we're most concerned about are:

"Please let me know and if you have other suggestions, I'd love to hear them."

Skippings referred questions to a union spokeswoman, who confirmed the authenticity of the e-mail and that the union is considering targeting the banks for unionizing.

"We believe there is special responsibility for companies who receive taxpayer dollars to ensure their workers have a voice on the job," SEIU's Lynda Tran said. "And those workers should have a seat at the table at the companies where decisions that impact the future of their families and the companies that employ them" are made.

"We are talking to workers really broadly in banking," she said.

SEIU is the fastest-growing trade union in North America, according to its own Web site, with a membership of more than 2 million, including health-care industry workers and state and local government employees. It also represents guards and janitors who work in commercial and residential properties.

And its clout continues to grow. SEIU's $85 million in political donations made it the single-largest contributor to either party in the recent elections. The union worked vigorously for the election of Barack Obama, who has named a former union official as his White House political director, a post once held in the Bush administration by Karl Rove.

SEIU, which broke away from the AFL-CIO in 2005, is known for its successful but sometimes controversial tactics: It often targets private equity groups' leaders, as well as banks and companies, with loud and demonstrative rallies. The union's hierarchy has made no secret it hopes to grow under the incoming Democratic administration.

"I would say that we've been very vocal about the optimism about the new administration," SEIU's Tran said. "There are a number of newly elected members of Congress who agree with us on matters relating to working families."

One labor professor said SEIU's timing in trying to unionize bank workers may be on target "because financial institutions are at a moment of weakness."

"Low-wage earners are the growing sector of the work force," said Gregory DeFreitas, an economics professor at Hofstra University and director of its labor studies program. "This is a very shrewd political move to tie this to the bailouts."

DeFreitas said unions tend not to do well in attracting workers during economic recessions because jobs are scarce then. But he said recent surveys indicate a majority of workers would consider organizing, so the public's appetite for unions may be on the upswing.

"Bank teller jobs are one of the few jobs that are actually growing," DeFreitas said. "And they are low-wage earners, so it makes sense that it fits into the SEIU model. SEIU has been very opportunistic in growing its membership. Success breeds success."

The median annual earnings of bank tellers was about $22,000 in May 2006, according to the U.S. Bureau of Labor Statistics.

A spokesman for the American Bankers Association said it had no one who could comment on labor issues. He said the association represents 95 percent of the industry's $13.6 trillion in assets.