(CNN) -- A grandmother, mother and her child died when a military fighter jet crashed into a house in San Diego Monday, igniting a huge fireball, CNN's San Diego affiliates and the San Diego Union Tribune are reporting. 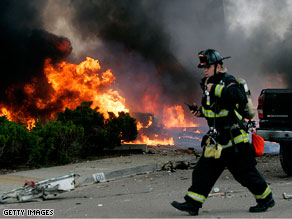 Fire rages in a San Diego neighborhood where an F/A-18 jet crashed Monday.

Another child is missing, authorities said. A search ended Monday when night fell but will continue Tuesday morning, a spokesperson for the medical examiner said.

The father is a businessman who was at work at the time of the crash, and was not reached for comment, according to the Tribune. The paper also reported that Monday night, a pastor and congregants at the family's church, the Korean United Methodist Church of San Diego in Clairemont.

The pastor told a television station that the mother was in the home with her two sons -- a 2 month-old and 1 year-old. The mother was a nurse at a hospital.

The F/A-18D plane, which authorities described as disabled, was trying to land at Marine Corps Air Station Miramar. The jet had just performed landing training on a Navy aircraft carrier before the pilot reported having trouble, according to the Marine Corps.

"It was, oh gosh, maybe a couple of hundred feet off the ground. And it was quiet -- I think the engine was off," said San Diego resident Ian Lerner, who was heading to lunch at a shopping center about a half-mile from the neighborhood of about 20 homes when he saw the jet flying low. iReport.com: See Lerner's photos

"Then all of a sudden we saw the canopy of the jet explode and go up, and then we saw the pilot blast out of the plane and the parachute open," Lerner said.

Another witness said the jet was flying at a low altitude, and "just spiraled, right out of [the movie] 'Top Gun.'"

The house was destroyed. A photograph taken at the scene showed the pilot, who ejected safely, sitting on the front lawn, making a call on his cell phone. He was taken the hospital, the Marine Corps said in a written statement Monday.

The pilot, whose name was not released, was the only occupant of the two-seat aircraft, according to the Marine Corps.

The Tribune spoke with Steve Diamond, a retired naval aviator, who found the pilot in a tree behind a house and helped the man who Diamond said was a lieutenant in his 20s, down from the tree.

The pilot told him that after he lost power in the first engine, and that it was decided he would try to get the jet to Miramar on the single working engine, Diamond told the paper.

The pilot was in communication with military air traffic controllers before the jet crashed, and the crash site is about two miles (three kilometers) from the airfield, the Federal Aviation Administration said.

Burning debris scorched two additional homes and a slice of jet knifed another home. "This could have wiped out half a dozen homes depending on how it landed," said Maurice Luque, a spokesman for the San Diego Fire-Rescue Department.

Inside one of those houses, Robert Johnson sat in the living room with his daughter, Heather Certain, and her 2-year-old son, Nicholas, according to the San Diego Union Tribune. They heard the explosion then saw a giant fireball in their picture window facing their front yard, the Tribune reported. They ran out of the house.

"The house shook like an earthquake," Johnson said. "I saw the flames right there in front of my house."

One resident interviewed by CNN affiliate KFMB said he saw a fighter jet at a very low altitude, and "it just spiraled, right out of 'Top Gun.' "

The Marine Corps said it is investigating what went wrong with the plane. The military has jurisdiction over the crash site. iReport.com: Smoke rises from fiery crash