(CNN) -- Senate Democrats and the White House failed to find 60 votes to end debate on a $14 billion auto bailout bill and bring it to a vote Thursday night, killing the measure for the year. 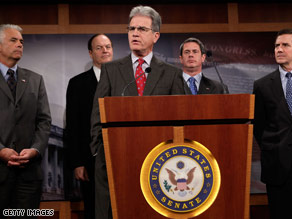 The 52-35 vote followed the collapse of negotiations between Senate Democrats and Republicans seeking a compromise.

"We have worked and worked and we can spend all night tonight, tomorrow, Saturday, and Sunday, and we're not going to get to the finish line," Senate Majority Leader Harry Reid said on the Senate floor before the vote. "That's just the way it is. There's too much difference between the two sides."

Reid acknowledged the bill would not survive the procedural vote.

Senate Minority Leader Mitch McConnell said the sticking point was the United Auto Workers' refusal to set a "date certain" to put employees at U.S. auto manufacturers at "parity pay" with U.S. employees at foreign automakers in the United States.

Currently, analysts estimate the union workers at U.S. automakers make about $3 to $4 per hour more than the non-union U.S. employees of foreign automakers like Toyota and Honda, according to the Center for Automotive Research.

Watch the market ramifications of the bailout failure »

The House easily passed the bailout bill earlier this week, but it quickly ran into trouble in the Senate, where Republicans objected to several provisions. Negotiations Thursday involved a compromise proposal put forward by Sen. Bob Corker, R-Tennessee, but the senators could not reach agreement.

The collapse of negotiations could possibly doom General Motors to a bankruptcy and closure in the coming weeks, with Chrysler potentially following close behind.

While Ford Motor has more cash on hand to avoid an immediate crisis, its production could be disrupted by problems in the supplier base, as could the production of overseas automakers with U.S. plants such as Toyota Motor and Honda Motor.

Watch how the automakers crisis has a ripple effect on Asia »

The struggling automakers may get some money anyway.

As part of their effort to urge skeptical Republicans to back the deal, Bush officials made clear that if Congress didn't act, the White House would have to step in to save Detroit from collapse with funds from the Troubled Asset Relief Program, according to the sources familiar with the conversations.

One of the sources said that a White House official made it clear to a GOP senator that would be the worst option, because the loan could go to the auto companies with few or no requirements along with it.

The sources asked not to be named because of the sensitivity of private conversations.

Democrats pressed the White House from the start to help Detroit by using some of the $700 billion for the financial sector, but the White House and Treasury Secretary Henry Paulson refused.

"I would only hope that the president, who has worked so well with us for the past several weeks, would now consider using the TARP money," Reid said after Thursday night's vote.

CNN's Dana Bash and Ted Barrett contributed to this report

All About U.S. Congress • Detroit