WASHINGTON (CNN) -- The U.S. Army intentionally denied benefits to soldiers suffering from a widespread stress disorder after they returned from service in Iraq and Afghanistan, a veterans advocacy group charges in a suit filed Wednesday. 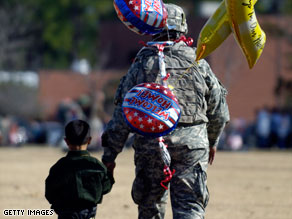 A soldier is welcomed home from Iraq by his son at Fort Stewart, Georgia, earlier this month.

The lawsuit, filed by the National Veterans Legal Services Program, accuses the Army of illegally cutting off benefits to thousands of veterans and their families by refusing to assign a proper disability rating to those veterans after they had been discharged with a diagnosis of post-traumatic stress disorder (PTSD).

As a result, the veterans have been denied benefits, including, among other things, lifetime monthly disability payments and free medical care for themselves and their families.

All disabled veterans are assigned a disability rating from zero to 100 percent. According to the Legal Services Program, a rating of at least 30 percent is required to qualify for benefits such as monthly disability payments and free health care.

Soldiers receiving less than a 30 percent rating are entitled only to a one-time lump sum severance payment after being discharged.

On October 14, the Defense Department ordered the Army to assign at least a 50 percent rating to all soldiers discharged with PTSD in the future.

The lawsuit seeks to provide full benefits to all veterans discharged with PTSD in the past six years.

A Rand Corp. study released in April indicated that nearly 20 percent of all military service members returning from Iraq and Afghanistan have reported symptoms of PTSD or major depression.