WASHINGTON (CNN) -- -- Federal officials have fined Exxon Mobil more than $6 million after it violated a three-year-old agreement to decrease air pollution at four of its refineries. 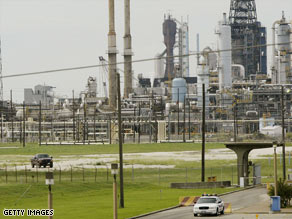 Exxon Mobil's refinery in Baytown, Texas, is one of four that the EPA said had high sulfur emissions.

The Justice Department announced Wednesday that the oil giant agreed to pay $6.1 million after Environmental Protection Agency officials determined the company had not sufficiently reduced sulfur emissions in its refineries in Baytown and Beaumont, Texas; Baton Rouge, Louisiana; and Torrance, California.

Exxon Mobil had paid a $7.7 million fine in its original 2005 agreement with the government and promised to install new emissions controls at the refineries.

The petroleum company said after the latest settlement its refineries now meet the required EPA standards on sulfur emissions.

The company's role in environmental pollution has been in the spotlight ever since the 1989 Exxon Valdez accident in Alaska, the worst oil spill in U.S. history.

This past summer, the U.S. Supreme Court ordered the company to pay $507 million in punitive damages from the incident, down from an original $2.5 billion judgment.