ASHLAND, Ohio (CNN) -- An Ohio bakery shut down in October is bustling again, with 60 eager employees who had expected a Christmas on the unemployment rolls. 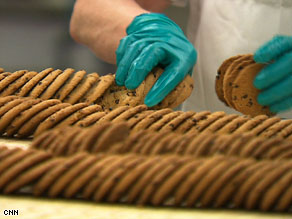 Cookie production has resumed and some workers are back on the job at the Archway factory in Ashland, Ohio.

Some 300 workers lost their jobs when the Archway cookie factory in Ashland, Ohio, was suddenly closed by the private equity firm that owned it. The workers also were left without benefits like health insurance.

But then Lance Inc., a Charlotte, North Carolina-based snack food company, purchased Archway at a bankruptcy auction. And last week 60 workers were asked to return immediately, with perhaps more coming back in the months ahead.

Kathy Sexton, a worker at the bakery, had been preparing her children for a very modest holiday.

Watch the holiday brighten for workers »

"They said they understood," Sexton recalls. "They said, 'That's all right, Mom.' You always want to give them more, but ... I didn't think I would be able to."

Tiny Ashland has been struggling. Ohio has lost 200,000 jobs over the past eight years. The recent presidential campaign saw both candidates visiting frequently.

The outlook in Ashland became especially bleak when the Archway plant closed. Workers at the bakery said they felt betrayed when Archway at first said there would be more work in a day or two, but then changed the locks.

"They just kept taking and taking until there was nothing left to take," Devan says, "and they didn't care that they were putting 300 people out of work."

When it promised to reopen the bakery, Lance gave all 300 former Archway workers a $1,500 prepaid debit card.

David Singer, CEO of Lance, says the gift cards were a way of letting Ashland know the new owners are different. "We wouldn't do it willy-nilly," Singer says. "We do want to make money. But this is the pool of folks that we intend to hire. We just wanted to let them know who we were."

The 60 workers rehired so far are earning their previous salary and retained their seniority. They also were provided health insurance from day one.

The bakery now produces Lance cookies that are sold to big chains like Target and Wal-Mart. But production of Archway cookies is scheduled to resume soon. Lance has told the employees that it hopes to have the plant fully operational by the end of 2009 -- that is, five lines of cookies being produced simultaneously.

The new owners say that if new orders keep flowing in, more jobs will follow.

Terry Mowry is another worker rehired by Lance. He says what has happened is hard to describe: "You just saw life being breathed right back into the face of these people."

And Devan says with a laugh: "I walked into the garage last night, and my husband says, 'You actually smell like a cookie again.' "

All About Jobs and Labor