KINGSTON, Tennessee (CNN) -- The Environmental Protection Agency has found high levels of arsenic and heavy metals in two rivers in central Tennessee that are near the site of a spill that unleashed more than a billion gallons of coal waste. 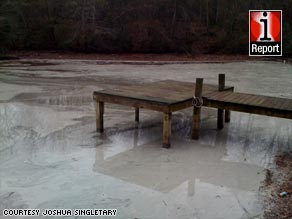 Four days after the spill, the water is cloudy on the east bank of the Clinch River in Kingston, Tennessee.

The agency said it found "several heavy metals" in the water in levels that are slightly above safe drinking-water standards but "below concentrations" known to be harmful to humans.

"The one exception may be arsenic," the agency said in a letter to an affected community. "One sample of river water out of many taken indicated concentrations that are very high and further investigations are in progress."

However, arsenic was not detected in a water intake facility near Kingston, Tennessee, where the spill happened, said EPA spokeswoman Laura Niles.

The metals were found in the Emory and Clinch rivers, near the site of a major spill last week that unleashed enough sludge to fill 1,660 Olympic-size swimming pools.

The EPA's letter comes as the head of the largest public power company in the nation pledged to clean up the massive spill.

"This is not a time where TVA holds its head high," said Tom Kilgore, president and CEO of the Tennessee Valley Authority. "But we won't hang our head, either, because that won't get the job done. I'm here to tell you that we will clean it up, and we will clean it up right."

The sludge is a byproduct of the ash from coal combustion. A retention site at the Tennessee Valley Authority's power plant in Kingston, about 40 miles west of Knoxville, contained the waste until a wall breached last Monday, sending the sludge downhill to damage 15 homes and cover at least 300 acres.

All residents in the area were evacuated, and three homes were deemed uninhabitable, according to the TVA.

The plant sits on the Clinch River, which is a tributary of the Tennessee River. Video footage from the river, a popular fishing site, reveals piles of dead fish on its banks. The TVA says that has nothing to do with the toxicity of the sludge, though environmental advocates say the ash contains concentrated levels of mercury and arsenic.

TVA officials have said water quality tests from a nearby water treatment facility have shown that the water from the river intake meets federal and state guidelines for potable water. But coal operation critics remain concerned about the long-term effects of the spill, and residents have expressed concerns about drinking water, especially from wells.

Roane County Emergency Management Director Howie Rose said the county has asked the state and the federal Environmental Protection Agency to monitor groundwater from wells around the area. He and Kilgore spoke at a town hall meeting Sunday.

Rose said the county has also requested air quality tests from the state and federal agencies.

Steve Ahlstedt, an independent aquatic biologist, told CNN that a spill of this magnitude probably will affect the area's ecological balance.

"Once the ash has settled to the bottom of the rivers, all heavy metals will hang around for a long time," he said. "When coal releases into the water, the mussel population goes into deep freeze. They are the 'canary in the coal mine.' They are the main indicator of how healthy our water is."