(CNN) -- Oprah Winfrey once dubbed it the "greatest love story" she had ever heard: a boy held at a Nazi concentration camp during World War II and a girl on the outside who tossed him apples to keep him alive. They eventually married and grew old together. 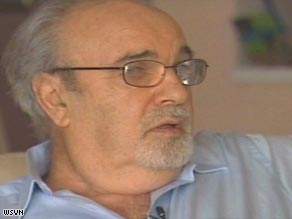 Herman Rosenblat has acknowledged his Holocaust love story is fake: "I am sorry."

It turns out the story of Herman and Roma Rosenblat isn't true.

The two had told their love story for years and years, inspiring a book deal, an upcoming movie, and stories across the globe on television, in papers and on the Internet. A children's book, "Angel Girl," was also based on their love story.

When the couple appeared on "The Oprah Winfrey Show" more than a decade ago, the famed host called it "the single greatest love story in 22 years of doing this show."

But over the weekend, Herman Rosenblat issued a statement through his literary agent, Andrea Hurst, acknowledging the story of how he met his wife was made up.

"Why did I do that and write the story with the girl and the apple, because I wanted to bring happiness to people, to remind them not to hate, but to love and tolerate all people. I brought good feelings to a lot of people, and I brought hope to many. My motivation was to make good in this world," he said in the statement.

"In my dreams, Roma will always throw me an apple, but I now know it is only a dream."

Herman Rosenblat really was in a Nazi concentration camp during World War II -- a subcamp of Buchenwald -- and he really has been married to Roma for decades. Beyond that, the truth is murky.

Berkley Books immediately canceled publication of Rosenblat's memoir, "Angel at the Fence," which was set to be released in February.

"Berkley will demand that the author and the agent return all money that they have received for this work," Berkley spokesman Craig Burke said in a statement.

A movie version of the Rosenblats' story -- even though now proven a hoax -- remains in the works. Atlantic Overseas Pictures says the movie is a fictionalized adaptation and that "the story retains its power to grip audiences worldwide."

Many Holocaust scholars had long cast doubt on the Rosenblats' story.

Professor Ken Waltzer, the director of Michigan State University's Jewish Studies program, said he began raising questions to the agent and publisher in November, suggesting that the story was fabricated. But he says his numerous queries went unanswered.

He says he told the editor that the story is "at best embellished and perhaps invented."

"The idea of a prisoner being able autonomously to approach the fence not just once, but every day at the same time, ... none of it seemed plausible," Waltzer says. "That fence was right next to the SS barracks, so to go to the fence, which was also punishable by death, was to risk death."

In a letter to "The New Republic," which first began questioning the validity of the Rosenblats' story, Waltzer said he was also disturbed about why few others had come forward to point out holes in the couple's account.

"Less understandable is the widespread belief in their story -- by the culture makers, including the publisher and movie maker and many thousands of others who have encountered it over a decade," he said. "Second, such belief suggests a broad illiteracy about the Holocaust and about experience in the camps -- despite decades of books, serious memoirs, museums, and movies. This shakes this historian up."

"This memoir was at the far end of implausibility, yet until yesterday, no one connected with packaging, promoting, and disseminating it asked questions about or investigated it. Some actively resisted such investigation and tried to shut mine down."

New Republic special correspondent Gabriel Sherman told CNN another disturbing element is that Herman Rosenblat really is a Holocaust survivor who "didn't need to embellish his love story, because his own story is so powerful."

Watch Sherman describe the unraveling of the love story »

Sherman said Rosenblat was shot during a robbery in the 1990s at his workplace. When he was was in the hospital, Rosenblat said he had a vision from his mother to tell his love story. "From that moment on, he started telling his story in public," Sherman said.

In his statement released over the weekend, Herman Rosenblat said, "To all [who] supported and believed in me and this story, I am sorry for all I have caused to you and everyone else in the world."

Holocaust scholars say they hope the revelation that the love story is fictitious doesn't distract from the reality of the Holocaust, when Nazi Germany killed 6 million Jews.

"On the far extreme, something like this could give fuel to those who are in the business of denying that the Holocaust ever took place," said David Marwell, director of The Museum of Jewish Heritage.

CNN's John Zarrella and Randi Kaye contributed to this report.