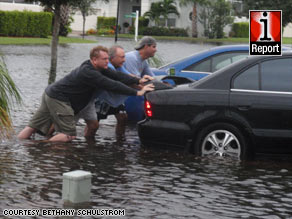 Streets are flooded Wednesday in Port St. Lucie, Florida, in a photo from iReporter Bethany Schulstrom.

As of 11 p.m. ET, the storm was just off the coast of central Florida about 35 miles southeast of Daytona Beach, the National Hurricane Center said.

The storm was moving slowly but could make landfall again in northern Florida Thursday, the hurricane center said.

It would be the fourth time the storm makes landfall. Fay has come ashore in Florida twice after making landfall in Cuba.

Florida Gov. Charlie Crist has asked President Bush to declare an emergency in the state to free up federal funding.

The storm "is producing historic flooding across a large portion of Brevard County," Crist wrote in a letter to Bush. "Fay has and will continue to produce copious amounts of rain over a large portion of northeast Florida as the storm turns westward on August 21.

"Fay remains a significant threat," Crist continued, noting that tornadoes have touched down in seven counties.

The governor pre-emptively declared a state of emergency last week.

As of 11 p.m. ET, Fay the storm had maximum sustained winds of 60 mph (95 km/h), and it was expected to move slowly toward the northwest overnight, according to a hurricane center advisory.

"This general motion is expected tonight with a gradual turn to the northwest and west-northwest on Thursday," the National Hurricane Center said. "On this track, Fay is forecast to move very slowly across northern Florida on Thursday."

Fay could make its fourth landfall Thursday along the Florida coast, possibly in the Jacksonville-Daytona Beach area, forecasters said.

"The storm continues to be a threat to this community," Jacksonville Mayor John Peyton said. "Looks like the worst is still ahead."

Peyton said Jacksonville had set up shelters should people need them.

Storm tides of 1 to 3 feet above normal are possible along the Florida's east coast, to the north of the center of Fay, the hurricane center said, adding that isolated tornadoes are possible over portions of northeastern Florida and southeast Georgia.

The storm forced NASA to close for a second day because of "potential wind threat," NASA said on its Web site. The agency was to announce Wednesday night whether it would also be shut Thursday.

The U.S. Navy announced Wednesday afternoon that it was moving several ships and aircraft in anticipation of Fay's arrival in northeast Florida. Naval Air Station Jacksonville has evacuated 24 P-3 Orion aircraft to bases in Maine and Ohio.

On the southeast coast of Florida, Fay flooded hundreds of homes in St. Lucie County, authorities said. Rescuers were using airboats and other means Wednesday to pick up stranded residents.

Earlier in the day, the county's Public Safety Department said that as many as 8,000 homes might be affected in two low-lying areas but later scaled the number back.

Crist said he wasn't sure when the man died, but the medical examiner received the body Monday.

Meg Defore said that the first floor of her home was 14 feet above ground but that water had reached the top of her doors. She left in a small boat.

Near the north fork of the St. Lucie River, water gushed down streets and lapped at the doors of parked cars.

iReporter Bethany Schulstrom, 16, said water was up to people's knees in the streets of Port St. Lucie.

"They sent a warning to everyone not to leave [their homes] because the snakes are coming out of their holes and there's fish everywhere," she said.

A tropical storm warning, meaning that tropical conditions and winds of 39 to 73 mph are expected within a day, was in effect from Fort Pierce in St. Lucie County north to Altamaha Sound in Georgia.

A tropical storm watch, meaning that those conditions are expected within 36 hours, remained in effect from north of Altamaha Sound to the Savannah River.

In Melbourne, where a 50-year-old rainfall record was shattered, residents have been warned of an alligator swimming in the streets, according to CNN affiliate WKMG-TV in Orlando.

CNN's John Zarrella and Barbara Starr contributed to this report

All About National Hurricane Center • Florida