NEW ORLEANS, Louisiana (CNN) -- New Orleans Mayor Ray Nagin ordered a mandatory evacuation of the city beginning 8 a.m. Sunday but urged residents to consider escaping "the mother of all storms" before then. 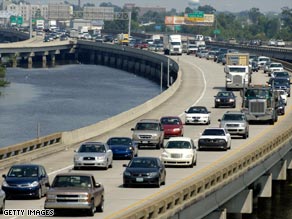 "You need to be scared," Nagin said of the Category 4 hurricane tearing along Cuba's western coast. "You need to be concerned, and you need to get your butts moving out of New Orleans right now. This is the storm of the century."

The city's west bank is to evacuate at 8 a.m.

Nagin said the city had evacuated roughly 10,000 people Saturday on buses, trains and planes, in addition to the thousands who left on their own. Buses from collection points would continue running until midnight and resume at 6 a.m. Sunday, he said.

"This storm is so powerful and growing more powerful every day," Nagin said. "I'm not sure we've seen anything like this."

At 8 p.m. ET, Gustav's eye was over western Cuba near Los Palacios, about 65 miles (105 kilometers) west-southwest of Havana, with sustained winds near 150 mph.

Hurricanes are ranked 1 to 5 in intensity on the Saffir-Simpson scale. A Category 4 has winds of 131 to 155 mph and can cause extreme damage.

Watch a report on the hurricane watch »

"This storm could be as bad as it gets," Louisiana Gov. Bobby Jindal said Saturday afternoon. "We could see flooding even worse than we saw in Hurricane Katrina."

New Orleans joined the growing list of local governments in south Louisiana ordering mandatory evacuations on Saturday and Sunday as Gustav roared past Cuba and into the Gulf of Mexico. iReport.com: Leaving home? Share your story

Many parishes also were imposing tough dusk-to-dawn curfews, hoping to assure residents that they could evacuate without fear of their vacant homes being looted.

Jindal did not order mandatory evacuations at a state level, but he urged residents to take the evacuations seriously.

"I wouldn't worry about whether the evacuation in your parish begins at 4 p.m. today or 8 a.m. tomorrow," he said. "When it comes to evacuation, do it sooner rather than later."

Jindal said the state planned to begin "contraflow" procedures, opening both sides of interstates to outgoing traffic only, at 4 a.m. Sunday.

Thousands of people had begun fleeing the coast by the time a hurricane watch was issued Saturday afternoon for southeastern Texas to the Alabama-Florida border.

The watch, which means hurricane conditions are possible within 36 hours, was announced the day after many in the region marked the third anniversary of Katrina's landfall.

In New Orleans, anxiety was high Saturday as residents fled, leaving behind a ghost town of boarded-up homes and empty streets.

Hundreds of people lined up for buses and trains to take them out of New Orleans and thousands of other Gulf Coast residents drove inland, clogging major highways.

At the Union Passenger Terminal in downtown New Orleans, people began arriving as early as 5:30 a.m., forming a line that snaked behind the main Amtrak terminal. Humvees circled the crowds of people, many who waited as long as 2½ hours, enduring the heat and relentless sun, unsure of their destination.

New Orleans officials designated 17 sites for people without transportation to board buses to take them to the terminal, where they will be moved to shelters outside New Orleans. However, scores of residents went directly to the terminal, prompting confusion, as did a glitch in the computer system being used to register people.

Jindal suspended registration at the terminal and instructed people to register when they arrive at shelters. By Saturday afternoon, 1,100 to 1,200 people had left the city on those buses, Nagin said.

"I'm not sure where I'm going," Margie Hawkins of New Orleans said. "My last 24 hours have been somewhat worrisome and very, very prayerful, because this is a very serious threat, and it's a lot of people to get to safe ground or be safe where they are."

The city also arranged with Amtrak for more than 7,000 seats to evacuate the elderly by train. About 1,500 people left for Memphis, Tennessee, Nagin said.

There were also crowds at New Orleans' Louis Armstrong International Airport, which the city plans to keep open through 6 p.m. CT Sunday. Both Delta Air Lines and AirTran Airways said they planned to continue flights in and out of New Orleans until the airport is closed.

The hurricane is projected to pass over western Cuba and to move into the southern Gulf of Mexico early Sunday and into the central Gulf by early Monday, according to forecasters. Gustav could make landfall as a Category 3 or 4 on the U.S. Gulf Coast late Monday or Tuesday, the National Hurricane Center said.

The storm called up uneasy memories Friday of the deadly 2005 hurricane season, particularly of Katrina. When Katrina hit, more than 1,800 people died in five states, 1,577 of them in Louisiana.

Unlike the situation during Katrina, there will be no "shelter of last resort," the city said. In 2005, the city's Louisiana Superdome housed thousands of New Orleanians who couldn't, or didn't, heed the mandatory evacuation order.

Nagin warned that all but a "skeleton crew" of city workers would be leaving the city and said local authorities could not promise help for those who choose to stay behind.

"This is very, very serious, and we need you to heed this warning," he said. "We really don't have the resources to rescue you after this."

CNN's Chris Lawrence and Sean Callebs contributed to this report.