PORT ALLEN, Louisiana (CNN) -- Sixteen-year-old Tanya Simon is trying to keep spirits up inside the hall that has become home to families fleeing Hurricane Gustav. 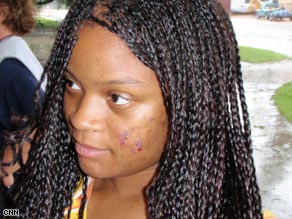 She brought two hair weaves with her from New Orleans and is passing the time by styling them and trying to reach friends on her cell phone.

But she's struggling even to keep her own nerves at bay.

"You're not at home in a place like this. You look around, and you don't know the background of the people looking at you," she said, adding that she felt a little scared.

The community center smells, and there aren't enough cots for the 80 or so people seeking shelter there in Port Allen, Louisiana, just across the Mississippi from Baton Rouge.

Tanya Simon is one of 18 members of her extended family who piled into a truck borrowed from a friend to get out before the storm hit.

Her cousin Detrice Simon, 15, sits on a Superman sleeping bag, wrapped in a Spider-Man blanket, occasionally reaching out to grab and quiet one of her three nephews.

She had been trying to read a well-thumbed leather-bound Bible but had given up. "I don't have the patience any more."

The family is safe, far safer than three years ago, when floodwaters from Hurricane Katrina had them trapped in their third-floor apartment for three days. iReport.com: Your Gustav stories

In 2005, the family shared a dwindling food supply with neighbors as they waited to be rescued, said 18-year-old Terrence Cargo, another cousin.

"We thought everybody was going to die," he recalled.

Now, American Red Cross staff members and volunteers are making sure the evacuees are getting three meals a day and snacks too, but it seems to be only temporary comfort.

"We're so far from home; we have no money; we have no food. The money is running out. I'm not even sure if we have any left," said Deandra Simon, Detrice's sister.

Just getting out of New Orleans took a big bite out of their resources when they stopped at a gas station, the 22-year-old motel housekeeper said.

"Watching how expensive it got, the more we filled up the tank, I gotta tell you, that scared me."

It's the stories and fears of women like Deandra Simon -- whose three sons, aged 1, 2 and 6, are with her -- that really get to Jean Cappuchi.

Cappuchi, a registered nurse from New Hampshire, had volunteered in the aftermath of Katrina and booked a flight back to Louisiana as Gustav approached.

"It breaks my heart, these little ones. Their mothers are so stressed out, they're crying," Cappuchi said.

"They don't know if they're going to be able to put food on their table. When they return home, if they have a home to return to."

Cappuchi has mostly dealt with people crying and having panic attacks.

"We have learned a lot from Katrina, but in these shelters, we are going to have chaos. There's always chaos."

Outside, Douglas Patterson, 54, and his friend James McDaniel, 42, played dominoes with two National Guardsmen as the winds began howling.

"Here it comes," Patterson said, shaking his head. "Damn, it sounds like something, don't it?"

Patterson said he worked in construction as a waterproofer. "I wish could stop this water," the New Orleans native said.

Watching the game, Chester Reeder also kept one eye on his children as they played hide-and-seek behind two steel water tanks in the old one-room gymnasium.

They had spent 11 hours on the road, forced to detour through Mississippi to get to Baton Rouge.

Just the cost of gas was bad enough on a welder's budget, but Reeder plans to stay in New Orleans no matter how many storms hit.

But he wonders whether his city has the strength to keep standing.

"Sooner or later, God is gonna wipe New Orleans off the map for all the murdering and thieving and no-good behavior people have been doing since Katrina," he said.

"That man keeps giving us warnings in the form of hurricanes."

All About Hurricanes and Cyclones • New Orleans • Louisiana