NEW ORLEANS, Louisiana (CNN) -- Efforts to bolster a private New Orleans-area levee that had been in danger of failing because of Hurricane Gustav appeared to be working Monday night, the president of a parish said. 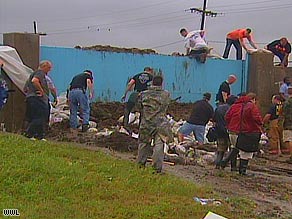 Crews work to reinforce a levee on a canal in Plaquemines Parish, Louisiana, on Monday afternoon.

"We have stopped the bleeding and I am very encouraged by what we are seeing," said Plaquemines Parish President Bill Nungesser.

While water came over the top of other levees along the Mississippi River, the barriers were holding against the battering waves that Gustav brought to southeastern Louisiana.

The private levee near Braithwaite, about 20 miles down the Mississippi from New Orleans, was the focus of concern after several small cracks were reported. Water also had been coming over the top of the barrier.

Sheriff's deputies, firefighters, jail inmates and parish crews, backed up by a front-end loader, spent much of Monday afternoon piling dirt and sandbags in front of a bright blue floodgate that was leaking water.

By Monday night, water levels had fallen some but crews continued the sandbagging effort, Nungesser said.

The structure runs along the Caernarvon Diversion, separating it from communities such as Braithwaite and Scarsdale.

About 300 to 400 homes are in the area, on the east bank of the Mississippi near the St. Bernard Parish line. Nungesser said he did not know how many people remained there despite warnings to leave. iReport.com: Gustav pounds Gulf Coast far and wide

The low-lying parish near the mouth of the Mississippi was heavily damaged during Hurricane Katrina in 2005.

Parish officials have tried to get the federal government to take the private levee into their system for several years, Nungesser said. In the meantime, he said, the parish raised the levee 2 feet and planted grass on top of it to prevent erosion.

"Obviously, 2 feet was not enough, but that's as high as we were able to raise it," he said.

Gustav made landfall about 10:30 a.m. Monday near the coastal town of Cocodrie, Louisiana, roughly 80 miles southwest of New Orleans.

In New Orleans, Gustav drove sheets of water over the protective levees around New Orleans' Industrial Canal early Monday afternoon, but the walls appeared to have held as the winds faded.

See where the water was coming over levees »

Up to 6 feet of water spilled into an industrial park in the Upper 9th Ward of New Orleans at one point late Monday morning, pouring through small gaps in the concrete flood walls before receding in the afternoon.

Wind-whipped whitecaps curled over the top of the flood walls near the Claiborne Avenue railroad bridge while others poured across the levee in the Gentilly neighborhood, north of downtown.

"The levees all held up," said New Orleans Mayor Ray Nagin. "I was hoping that this would happen -- that we would be able to stand before America and before everyone and say we had some success with the levee system."

But Nagin noted that the results only show the city's ability to withstand a Category 2 storm. He urged the federal and state governments to commit to completing the levee system's improvements as soon as possible.

The Industrial Canal levee failed during Hurricane Katrina in 2005, devastating the Lower 9th Ward and neighboring St. Bernard Parish. The storm breached three levees and left more than three quarters of the city under water.

A levee re-engineering and rebuilding project began after Katrina, but it is not scheduled to be complete until 2011.

Among the improvements are concrete "splash pads" on the protected sides, meant to prevent the earthen levee from eroding around the base of the concrete flood walls that sit atop them. During Katrina, water pouring over the tops of some of the flood walls ate away at the levee beneath, causing the structures to fail.

"We're confident of those structures, although it's still very dangerous any time you're getting wave overwash like that, and wind and wave continue to press against those walls," said Maj. Gen. Don Riley, director of civil works for the Army Corps of Engineers. "I think we're confident in resilience of these new flood walls."

Riley said Katrina damaged 150 miles of the 350-mile levee system. Rebuilding and improving the system is a slow process, he said.

"We're working this with a sense of urgency, but it does take time to do this properly," he said.

All About Hurricane Gustav • New Orleans