Gustav, near landfall, could park over northeast Texas

NEW ORLEANS, Louisiana (CNN) -- As Hurricane Gustav neared Louisiana's coast Monday morning, forecasters warned that the storm could stall over Louisiana and northeast Texas for several days, which would "exacerbate the threat of heavy rains and inland flooding." 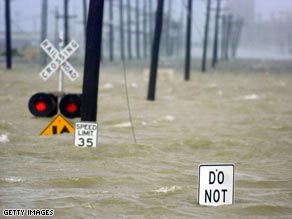 Southern Louisiana's barrier islands and coast reported hurricane force winds and heavy rains from Gustav, which was centered about 80 miles south of New Orleans and about 20 miles south-southeast of Port Fourchon, Louisiana, at 8 a.m. CT.

Power went out about 6 a.m. in the western part of downtown New Orleans and in the French Quarter 10 minutes later, CNN correspondents Chris Lawrence and Anderson Cooper reported.

The eye of Hurricane Gustav made landfall near Cocodrie, Louisiana, about 9:30 a.m. CT, the National Hurricane Center said.

Gustav's top winds weakened to 110 mph, downgrading it to a Category 2 storm, the hurricane center said.

Earlier predictions of a Category 4 storm, which would mean winds of at least 131 mph, and fresh memories of Katrina, which came ashore in 2005 with 127-mph winds, fueled the evacuation of 2 million residents from New Orleans and other parishes.

The latest discussion published by the hurricane center forecasters said computer models show "Gustav or its remnants slowing to a crawl" over northeast Texas over the next three to five days.

"Such slow motion would exacerbate the threat of heavy rains and inland flooding," the forecasters said.

With hurricane-force winds extending 70 miles from the center, the islands and shoreline are already in reach of Gustav's fury.

Sustained winds of 91 mph and gusts of 117 mph were measured in Southwest Pass, Louisiana, during the 4 a.m. hour, the hurricane center said.

CNN's Ali Velshi was hunkered down in a house on Grand Isle, Louisiana, where only a handful of people remained.

A storm surge of at least 14 feet is expected there, he said.