Editor's Note: Lt. Gen. Russel Honore led the military response to Hurricanes Katrina and Rita. As Commanding General First U.S. Army, Honore commanded Joint Task Force - Katrina. In the aftermath of Katrina, New Orleans Mayor Ray Nagin called Honore "a John Wayne dude" who can "get some stuff done." Honore, 60, is a native of Louisiana and has many relatives living there. He retired from active service in March and is a CNN contributor. The following is an edited interview with Honore conducted last night. 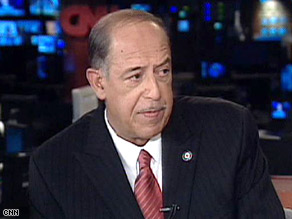 Russel L. Honore says Americans must embrace a culture of preparedness for a host of disasters.

(CNN) -- How is this situation different from the response to Katrina?

Katrina didn't have nearly the organized evacuation of the lower parishes that we've seen. If you start with this evacuation, you give it a thumbs-up. The levees have been reinforced, they're in better shape. The question is: Are they good enough? After Katrina, the federal government left planners down there for over a year to write this plan that's being executed now. All indications are that there is good coordination, good collaboration.

Evacuation is the easiest part of fighting hurricanes. This is like the pre-game show. You've got power, you've got cars. The hard part is after the storm, doing search and rescues, taking care of people who should have evacuated and didn't.

People on the street have spent the past three years just trying to recover. This is a region that is really struggling, it's an area that is very nervous. We owe them the best that can be done.

What kind of condition are the levees in?

The government decided that we're going to fix the levees that were broken. They have been repaired in the finest fashion. But don't think that we're going to have 100 percent protection [from the levees]. There's a limit to what you can do to protect yourself from flooding. iReport.com: Leaving home? Share your story

People talk about the Dutch. But the Dutch don't get hurricanes. When you're dealing with a storm surge of 30 feet, you're talking about a whole different ballgame. We have over 300 miles of levees.

I would not count on levees during a hurricane to save your life. Levees will give you early warning. If you're living behind a levee, you need to be prepared to evacuate at any time. That's Russel Honore's rule No. 1. If you live along the Mississippi River or on the Gulf Coast, rule No. 2 is: It's going to flood.

What about the people who didn't evacuate?

What are the longer term lessons?

We need to build a culture of preparedness. We need to assure that every kid who goes to school in America knows how to swim. The number of EMS teams and ambulances is not tracking with the growth in population. We need to teach more of our people first aid.

The federal government ought to be there to back the states up, we need to build a culture of preparedness in each. Why are we sending people there to issue them ice and water? We should be empowering people to act locally. The key to hurricane preparation is family preparation. If families are prepared, we lose fewer lives.

Government has to set standards for institutions like nursing homes and hospitals and for homes where people with mental or physical disabilities are kept. They should be evacuated well before the general population. We have to decide how close we should have those types of institutions to the coastline and to areas that will probably be flooded. That part of the population is just too vulnerable.

We need to create a national preparedness plan, with a local civil defense corps. We need dual trained teachers who can be disaster responders. We need to equip each high schools with satellite communications.

We need drugstores with generators in each geographical area ... If you lose power, people can still get medicine. Gas stations along interstate highways need to have generators. We need cellphone towers that could be lowered before the storm and then raised after the storm.

For every dollar you spend in preparedness before the disaster you save $9 after the disaster.

Since Katrina, FEMA and DHS have focused on fixing the problems we saw with Katrina. It looks like they've gotten there, but we face a hell of a lot of things more than just hurricanes.

I went to some government buildings Friday down in New Orleans. They still don't have enough back-up power.

What do you think of the decision by the Republican Party to scale back parts of its convention because of the storm?

The opinions expressed in this q-and-a are solely those of the subject of the interview.