Hanna closes in on U.S. as Ike becomes major hurricane

MIAMI, Florida (CNN) -- Tropical Storm Hanna moved through the Bahamas on Thursday and headed toward the Carolina coast with 65 mph winds, the National Hurricane Center said.

Forecasters predicted a slight strengthening of the storm, warning there was a possibility it may be a Category 1 hurricane when it hits the U.S. mainland. 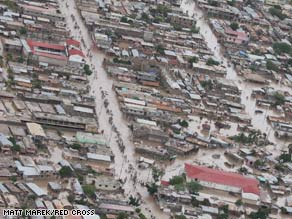 Water fills the streets of Gonaives, Haiti, on Wednesday after heavy rains from Tropical Storm Hanna.

Both states, as well as Georgia, have activated their emergency centers ahead of the storm, and North Carolina Gov. Mike Easley declared a state of emergency.

"It now appears Hanna will be a Category 1 hurricane when it hits the North Carolina coast early Saturday morning," Easley said in a news release. "Since the exact path is uncertain, everyone who lives in the coastal counties needs to be ready."

"The suggestion is for people to look at this storm and make their own decisions," he said.

"Every one of us needs to continue to watch out in the Atlantic because this could be a dress rehearsal for a thing called Ike," he said, referring to Hurricane Ike, a Category 4 storm spinning in the central Atlantic, hundreds of miles from the U.S. coastline.

Hanna was about 540 miles south of Wilmington, North Carolina, at 11 p.m. ET Thursday, according to the hurricane center.

A hurricane watch was in effect from north of Edisto Beach, South Carolina, to Currituck Beach Light, including Pamlico Sound.

The hurricane center's advisory said wind and rain from Hanna would reach the U.S. coast well before the center of the storm and that dangerous riptides were expected to increase along the coast.

Watch what Hanna, Ike and Josephine are doing »

Rescue workers are trying to get aid to affected victims of the storm, said Abel Nazaire, the assistant coordinator of Risk and Disaster Management.

As Hanna approached the East Coast, Charleston, South Carolina, prepared for the worst. Workers started boarding up buildings Wednesday, and firefighters filled sandbags and distributed them to residents and business owners. Backup generators were being gassed up and positioned at key locations around the city.

"We will continue until we know we're totally out of the woods," Charleston spokeswoman Barbara Vaughn said.

Cathy Haynes, Charleston County's director of emergency operations, said county schools will be closed Friday. "We'd also like to encourage residents that either live in low-lying areas or mobile homes, or if they just feel vulnerable to the situation at hand, to maybe move to safer locations," she said.

Jennifer Moses, a resident of Charleston's Daniel Island, said she was ready for whatever came.

"I filled up the gas can, I have water, I have peanut butter, and I took the rocking chairs off the front porch," she said.

Charleston sits on a peninsula between two rivers and is extremely prone to flooding. Recent downpours from the remnants of Tropical Storm Fay left a foot and a half of water on some streets.

But the city hasn't had a mandatory evacuation since Hurricane Floyd in 1999. Traffic then was so congested that it took up to 19 hours to drive inland to Columbia, usually a two-hour trip.

At Parris Island, South Carolina, hundreds of Marines graduated Thursday morning from basic training -- a day earlier than planned because the base didn't want Hanna to cause problems for families coming to the celebration, Master Sgt. Mark Oliva said.

However, Oliva said the base's emergency center was standing down, as the storm's track seemed to put Parris Island out of harm's way.

Meanwhile, Hurricane Ike, still hundreds of miles from the islands of the Caribbean, was a powerful Category 4 hurricane on Thursday. Its winds had dropped slightly, to 135 mph, but the center said Ike was still "extremely dangerous." iReport.com: Bracing for Hanna and Ike

The hurricane center's five-day forecast map shows Ike arriving near the Turks and Caicos Islands and the southeastern Bahamas on Sunday. The center's advisory said, "It is too early to determine what land areas might eventually be affected by Ike, but interests in the southeastern Bahamas and the Turks and Caicos Islands should monitor the progress of this system."

At 11 p.m. Thursday, Ike was about 475 miles north-northeast of the Leeward Islands, moving westward near 14 mph.

Watch a view of Ike from space »

Trailing Ike by about 1,600 miles in the eastern Atlantic was Tropical Storm Josephine. Josephine's winds had dropped to 45 mph, and the system was not forecast to make landfall any time soon.

CNN's Larry Shaughnessy and Alanne Orjoux contributed to this report.

All About Bahamas • Haiti • South Carolina