More than 120 rescued from Ike's floods

HOUSTON, Texas (CNN) -- Even with Hurricane Ike more than 100 miles away, authorities began rescue efforts Friday, picking up more than 120 people stranded by rising seas along the southeast Texas coast. 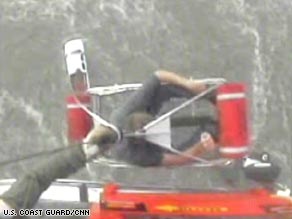 The U.S. Coast Guard rescues a person trapped in a car on Friday as Hurricane Ike hits Texas.

Most of the rescues occurred in Galveston County, where rising water and other effects of the storm began hours before expected landfall early Saturday.

Stranded residents have been airlifted from Crystal Beach, Bolivar Peninsula and other communities in the Galveston area. Many of those rescued were motorists stranded on flooded roads.

Watch rescuers save a motorist from floods »

Police also rescued another five people who waded out to meet the officers.

About half of those rescues were done by helicopters out of several bases along the coast, said Coast Guard Petty Officer David Schulein.

The Coast Guard helicopters from Air Station Houston could make their last flights Friday afternoon as rain starts to move in, Aiello said.

"We'll be out as long as the weather permits us," she said. "We're still working."

Some 37,000 people may need to be rescued after Hurricane Ike strikes, a U.S. military official said Friday.

Meanwhile, the Coast Guard and Air Force were unable to rescue 22 people aboard a freighter adrift in the Gulf of Mexico because of weather, the two military branches said Friday.

"Weather on scene deteriorated to a point that made the rescue impossible," the Coast Guard said in a statement issued Friday. First Lt. Lauren Johnson, an Air Force spokeswoman, confirmed the report. Aircraft were used in the effort, a spokeswoman for the U.S. Coast Guard said.

Coast Guard officials had said earlier they thought the best way to help the 584-foot freighter might be to let the storm push it to shallow water where it can drop anchor.

Watch the captain of the freighter talk with CNN »

The freighter had been headed south from Port Arthur, Texas, and is loaded with petroleum coke -- a petroleum byproduct.

The Coast Guard said in a news release it received a distress call around 4 a.m. from the Antalina, a Cypriot-flagged freighter. It said the vessel had "lost main propulsion 90 miles southeast of Galveston" and was unable to steer.

Coast Guard Capt. Bill Diehl said the freighter had been "in the direct line of the path of the storm and lost its engines."

There had been warnings for residents to evacuate beforehand, and Chief Petty Officer Michael O'Berry, interviewed by CNN, was asked why they didn't get out in time.

He said he thinks the residents "didn't understand, I guess, the strength of the storm. As it came about, they realized it's a lot stronger than they may have anticipated."

All About U.S. Coast Guard