HARARE, Zimbabwe (CNN) -- Zimbabwe's High Court is expected to announce Monday whether it can order the country's electoral commission to release the results of last weekend's presidential election, a lawyer for the commission said. 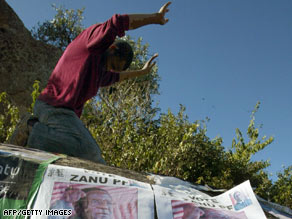 A man prays atop a rock plastered with President Robert Mugabe's posters in Harare on Saturday.

Zimbabwe's main opposition party, the Movement for Democratic Change, submitted a petition to the High Court on Friday to order the Zimbabwe Electoral Commission to release the figures from the March 29 election.

The hearing began on Sunday.

Also during the weekend, dozens of veterans loyal to longtime President Robert Mugabe invaded white-owned farms in two provinces and tried to force the white farmers out.

Zimbabwe's state newspaper, The Sunday Mail, reported that the ruling party has asked the electoral commission to recount the presidential ballots because of an "overarching and unpleasant case of misposting of votes."

The newspaper also quoted a ZANU-PF official as saying that the party has rejected an offer from the opposition MDC to form a national unity government, saying such a coalition would be "like mixing water with fire."

Last weekend's election presents the most formidable challenge to Robert Mugabe's 28 years of rule in Zimbabwe.

See photos from the country's elections »

His party has said he is willing to enter into a runoff with MDC leader and presidential candidate Morgan Tsvangirai if the electoral commission calls for one. A runoff is required if neither candidate wins at least 50 percent of the vote.

A look at the candidates »

Under Zimbabwean law, a runoff must be held within 21 days after the commission announces results.

Typically, the results of general elections are announced within two or three days of polls closing, Lovemore Madhuku, a law professor at the University of Zimbabwe and chairman of the National Constitutional Assembly, said Friday.

While Madhuku said there is no deadline by law to release the results -- despite claims by the Movement for Democratic Change -- he agreed that the delay of the presidential election results was unusual.

Tsvangirai contends he's the victor in Zimbabwe's presidential election and says he doesn't support a runoff with Mugabe, because he fears possible violence.

Tsvangirai has raised concerns that Mugabe may mobilize veterans like those who invaded the white-owned farms this weekend in an attempt to use violence to stay in power.

War veterans on Saturday invaded six farms in the southern Masvingo province, giving the farmers and their families between five and 10 hours to vacate their property, said Hendrick Olivier, the head of Zimbabwe's Commercial Farmers' Union.

Police were able to intervene, and Olivier said the farmers and their families "are safe in their homes."

On Sunday, some 25 war veterans camped out on a farm in the northern province of Mashonaland Central, and chanted liberation war slogans while the farmer and his family locked themselves inside their house, Olivier said.

"At this stage it is a volatile situation," he said.

Part of Zimbabwe's economic free fall is traced to Mugabe's land redistribution policies, including his controversial seizure of commercially white-owned farms in 2000.

Mugabe gave the land to black Zimbabweans -- most of them veterans of the country's war for independence -- and said they were cheated under colonial rule.

White farmers who resisted were jailed. Mugabe denies mismanagement and blames his country's woes on the West, saying sanctions have harmed the economy. E-mail to a friend

Journalist Eunice Mafundikwa in Atlanta contributed to this report.