Samm Farai Monro, better known as Comrade Fatso, is Zimbabwe's most popular protest poet as well as a leading political activist and grassroots blogger. He has performed his rebel poetry all over the world and says his debut album has been banned in his own country for being "too political." CNN has invited him to blog on events unfolding in Zimbabwe.

HARARE, Zimbabwe -- Things are quiet today. The calm before a storm. The silence before swearing. In.

People are waiting for Bob to swear himself in. The streets are quiet. People are pensive. Everyone knows this beast. It likes nothing more than victory. No matter how hollow. No matter how bloody.

So the people wait for Bob to declare his illegitimate victory. There's no impatience here. No curiosity about results. We all know that he will take all the ballot papers, spoilt and unspolit, and he will build his house of cards. His house of ballot papers built by serial killers. And we wonder how long it will take us to make it fall apart. 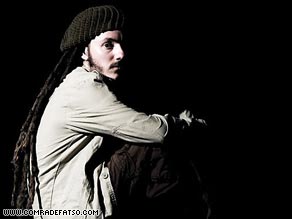 Samm Farai Monro, AKA Comrade Fatso, is a blogger, protest poet and political activist in Zimbabwe.

Today, Zimbabweans were faced with a single-candidate election in a land with seven-digit inflation where most people eat a single meal each day. So the choice was obvious. Stay away or spoil your vote. The single candidate participating wasn't worth an "X."

"I voted first thing this morning," says young, dreadlocked Tindo from the sprawling township of Dzivarasekwa. "I drew 10 'X's all over Bob and spolit my ballot!"

Collin from Highfields was a bit more poetic. He wrote a letter on his ballot paper, voicing his frustration with the election.

Many others have spolit their ballots or simply stayed away, despite threats of violence from ZANU's drugged-up militias. The turnout in most high density and low density areas has been tiny.

There have only been higher turnouts in areas where the militias have forced people to report to their bases with their ballot paper serial number so that the militias can "check" if they voted "correctly."

So Zimbabwe's subversive, totemless urban dwellers have once again invoked their right to stay away, last used in the late 1990s against ZANU's failed Structural Adjustment Programmes.

And apart from a few stragglers it seems that in the urban polling stations it has really been "Only Mugabe."

HARARE, Zimbabwe -- In this town appearance and reality are often two different things.

ZANU-PF posters arrogantly hug every wall. Their red, yellow, green and black colors hang from every third car's rearview mirror. Kombis, our public transport, have the party's colors emblazoned on their sides, their drivers, their conductors.

These are the lies that license Zimbabweans to live. Every youth militia road block demands that kombis and passengers are in ZANU (PF) regalia. Without this you are beaten. At least.

In their hearts Zimbabweans are different. Stubborn.

"Why aren't they sending in the U.N.? It's a war zone here isn't it?" says the one man in the paint-peeling bar with a Robert Mugabe poster encrusted on its walls. "None of us will vote tomorrow," said the other. "It will end. And the old man knows it."

Later in the day comrades from the high-density suburb of Highfields talk of the systematic intimidation by ZANU-PF militias.

"They say we must tell them the serial number of our ballot paper after voting and then they will check who we voted for," says Taurai. "But we all know that we should spoil our ballots if they force us to vote."

Even the school children know the truth. "They are beating and killing people for these elections," says a wise 8-year-old school girl. "Mugabe is a bad man. He must just go."

Thousands of posters can't cover up the deep feelings of a hurt, betrayed people. The run off has no legitimacy. And everyone knows that.

HARARE, Zimbabwe -- What's happening.? What are we doing? What's going to happen on Friday?

Harare, the rumor city, seems to have been struck by questions. The usual commas and exclamation marks have been electorally cleansed from street talk.

From the hustlers on street corners to restaurant kitchen staff, all talk in question marks.

The week has gone from the familiar certainty of a bloody election to the unknown reality of a boycott. And Zimbabweans can't find the answer to that.

So question marks hang over the people's heads like paused sickles. Some still joke. Mugabe decided that multiple choice in elections was an imperialist creation so he has given the people a simplified election: a single candidate.

But that's the length of the joke. And even the jokes here are said with question marks lurking at the end. Like paused sickles above the people's heads.

HARARE, Zimbabwe -- A sick, old man shuffled towards me as I walked towards my car from a civil society discussion on elections.

I said instinctively that I didn't have any money. He asked me to wait. Patiently, hopefully, urgently.

His quiet desperation stopped me. "Please just listen to me." I listened. "I am sick. I am going to die if I don't have this operation."

All he asked was that I take his bank account details and see if I could deposit some money towards his operation. This is public healthcare Zanu (PF) style.

Everything has fallen apart here. A once excellent public health care system is now a mortuary of unaffordable drugs.

The roads have more potholes than white lines. The zeros on our dollars are so many that the supermarkets now ask us to add three zeros in order to work out the actual price.

Some restaurants make up their own concepts, charging in "thollars" -- thousands of dollars -- so that once again the customer has to add three zeros to the bill.

The Zanu (PF) military junta's only policy at the moment is to beat its disobedient people into line.

What they don't realize is that fists and sovereignty won't make us vote. It's the stupid economy.

HARARE, Zimbabwe -- As the fireworks erupted we thought that maybe there was hope. Harare's sky was burning with fire. With what-could-be.

This was the opening show of HIFA, the Harare International Festival of the Arts. Comprised of some of Zimbabwe's leading singers and artists it was a show about a people whose dreams are stolen by a tyrannical king. This Idi Amin suit-clad king was modeled on our own dictator here in Zimbabwe. His hyenas were a symbol of the scavenger-like youth militia terrorizing the peasants.

But the people's deepest dreams and strongest songs cannot be stolen. So songs of resistance like Bob Marley's "Zimbabwe" were sung to the crowd of 8,000 Zimbabweans gathered in Harare Gardens last week. As the king's hyenas marauded on the stage attacking young children the singers broke into revolutionary songs from the liberation struggle. It culminated in an emotional rendition of John Lennon's "Imagine" by Zimbabwe's leading vocalist, Chiwoniso.

All of us artists involved felt as if we were given a window into what-could-be.

As fireworks went off over the heads of thousands of dreamers we all dreamt of a peaceful country without tortured bodies and burnt homes. For the one week of the festival we believed.

For one week we had a window into the future. And it's beautiful.

For more of Comrade Fatso's writing and music, click here.

You can comment on this blog using "sound off," below.