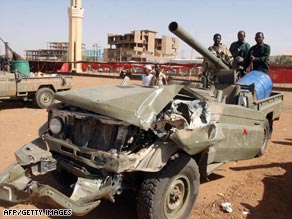 Fresh fighting in Sudan over an oil-rich town has raised fears civil war could again erupt.

Fresh fighting in Sudan over an oil-rich town has raised fears civil war could again erupt.

UN Secretary General Ban Ki-moon deplored the fighting between the Sudanese military and troops with the Sudan People's Liberation Army. The SPLA fought a rebellion against the government for more than 20 years until both sides signed a peace deal in 2005.

The deal's Comprehensive Peace Agreement ended a north-south civil war that killed about 2 million people and displaced more than 4 million others.

An impasse over the boundaries of the town of Abyei is a major reason the peace agreement has not been fully implemented.

Fighting erupted in Abyei on May 13. It resumed Tuesday despite a cease-fire and has "resulted in the destruction" of the town "and the displacement of between 30,000 and 50,000 people," the secretary general said in a statement.

Don't Miss Sudanese opposition leader arrested Sudan cuts ties with Chad after attack Darfur rebels advance on Sudan capital, their leader says "If the situation is not urgently addressed, the achievements thus far of the Comprehensive Peace Agreement could be placed at serious risk," he said.

The civil war in Sudan, which started in 1983, pitted a northern government dominated by Arab Muslims against black Christians and animists in southern Sudan.

That conflict was not directly related to ongoing violence in the Darfur region of western Sudan.

Human rights groups and United Nations say the Sudanese military armed and trained Arab militias in Darfur after a rebellion erupted in 2003. They say the military and militias have engaged in widespread killing, rape and forced displacements in Darfur as they battle about rebels who have splintered into roughly a dozen groups.

One of those groups staged a daring attack this month near the Sudanese capital, Khartoum. The government said it quashed the attack.

Nearly 300,000 people have been killed and 2.5 million displaced in Darfur in the last five years, the UN says.