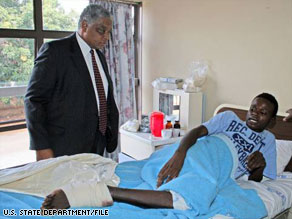 "While this immediate incident has been resolved, it will not be forgotten," McCormack said.

Just hours after the incident, Zimbabwe Social Welfare Minister Nicholas Goche said that all aid organizations were ordered to cease operations in the country until the presidential runoff is concluded, a journalist in the country said.

Despite Goche's announcement, Boniface Chidyausiku, the Zimbabwean ambassador to the United Nations, said CARE International was the only aid group told to suspend work.

The government had accused some of the 300 CARE employees in Zimbabwe -- mostly Zimbabweans -- of passing out brochures in favor of an opposition political party, CARE spokesman Kenneth Walker said. The organization denies the charge.

Chidyausiku said the Zimbabwean minister of social services is reviewing the activity of all non-governmental organizations in light of accusations that some have been politicizing their operations and campaigning for the opposition.

"What we find is that there have been complaints about NGOs operating as Trojan horses for the oppositions, but the opposition has denied it," he said.

Henrietta Fore, administrator of the U.S. Agency for International Development, urged the government of Zimbabwe to "lift the suspension on all international aid agencies involved in humanitarian work in the country." Fore told CNN that the "suspension is a direct threat to the lives and well-being of tens of thousands of innocent people in Zimbabwe."

U.S. Secretary of State Condoleezza Rice said, "This demonstrates this is a regime that is very much out of step with international norms."

British Foreign Secretary David Miliband said the detained Britons had been engaged in "the normal business of diplomacy." The British diplomat and three visitors were released unharmed and allowed to go about their business, he said.

"Obviously, this is a window into the lives of Zimbabweans," Miliband said. "Diplomats are protected by papers and international contacts in a way too many Zimbabweans are not protected."

Two U.S. Embassy cars and a British Embassy vehicle were going to check on reports of recent violence when they were stopped, McGee said.

"The police put up a roadblock, stopped the vehicles, slashed the tires, reached in and grabbed the telephones from my personnel," said McGee, who was not in the convoy.

"The war veterans threatened to burn the vehicles with my people inside unless they got out of the vehicles and accompanied the police to a station nearby," he added.

Matonga said the embassy officials were traveling in an area they didn't have authorization to enter.

"They went to an area without informing the foreign affairs," Matonga said. "It is very mischievous. And we know why you are doing it, but the police will stop this."

McCormack called the assertion that officials were not informed "absurd."

Zimbabwe officials have accused members of the U.S. ambassador's office of trying to aid the opposition party in the coming presidential runoff.

When McGee found out that embassy personnel were detained, he sent an embassy security officer to the scene to see whether he could help, he said.

Police extracted the security officer, a local, from the car and beat him, McGee said.

"These are diplomatic-plated vehicles. They knew exactly who was in those vehicles," McGee said. "This government is not following their own laws and definitely not following any international laws."

He added, "Zimbabwe has become a lawless country."

Matonga argued that the diplomats were detained because they wouldn't "comply" with police and tried to flee a roadblock.

He denied outright that a U.S. Embassy employee was beaten and that Zimbabwean forces slashed the tires of an U.S. Embassy vehicle.

However, he said soldiers may have taken diplomats to the ground when they tried to flee.

According to the U.S. State Department, McGee and diplomats from five other missions in Harare were detained and questioned by Zimbabwe's security forces May 13.

McGee and diplomats from the United Kingdom, the European Union, Japan, Tanzania and the Netherlands had just visited a hospital, the State Department reported.

On May 8, McGee penned a statement, officially breaking his silence on the political violence wracking Zimbabwe.

"I feel compelled, as a supporter of human rights, to speak out about the atrocities being committed across Zimbabwe," McGee wrote, saying the U.S. had received more than 700 reports of violence. "The violence cannot be allowed to continue. I will continue to speak out clearly and forcefully to demand its end."

He continued, "Let me also be clear that the U.S. is aware of the identities of many of those responsible for instigating the violence and for carrying it out. We will continue to gather evidence of the atrocities being committed so that the guilty can one day be brought to justice."

Though reports of violence have been common in Zimbabwe, there has been a significant uptick in attacks since the March 29 elections. Voters cast more ballots for opposition candidate Morgan Tsvangirai than for President Robert Mugabe, who has been in power since the African nation gained its independence 28 years ago.

After the election, the country's electoral commission reported that neither candidate received more than 50 percent of the vote. A runoff is scheduled for June 27.

Since the election, opposition and church groups have reported kidnappings, torture and other violence, including the deaths of opposition party members. They say the violence targets opponents of Mugabe and his Zanu-PF party.

All About Zimbabwe • U.S. Department of State