(CNN) -- Fourteen passengers are still missing after a plane burst into flames after landing in Sudan's capital Khartoum on Tuesday, killing 29 people. 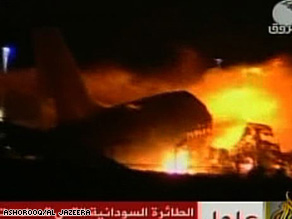 Officials say 29 are dead after a plane caught fire shortly after landing in Sudan.

Many passengers did not wait around for customs inspection after fleeing the burning plane, making the toll difficult to ascertain initially, officials said.

Khartoum Police Chief Mohammad Othman Mohammad Noor said that "a defect" in the Sudan Airways plane caused it to catch fire as it touched down during a storm.

"The fire then led to an explosion on the airplane," he said. "There was a large number of passengers on the plane, some of whom survived. The number of casualties is still unconfirmed at this time." iReport.com: Send your photos, videos

Lighting up the night sky, flames consumed the plane as it sat on the runway at the airport, which is in the center of Khartoum near residential and business areas.

Watch as flames engulf the wreckage »

The weather in Khartoum as the plane attempted to land was terrible. Low visibility and heavy rain and wind followed a big sandstorm earlier in the day.

The last airline disaster involving a Sudan Airways plane was July 8, 2003, when a Boeing 737 reported engine trouble after take-off from Port Sudan and missed its return approach to the airport. It crashed about three miles away. A 3-year-old boy was the only survivor of the 117 people aboard. It was Sudan's worst air disaster.

All About Sudan • Air Disasters