Mugabe: War vets ready to fight for me

HARARE, Zimbabwe (CNN) -- Zimbabwe's President Robert Mugabe has warned that veterans he commanded in his country's liberation war will take up arms again to prevent the opposition party from taking power. 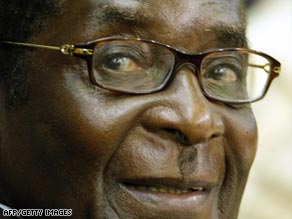 Mugabe -- Zimbabwe's only leader since that struggle ended in 1980 -- faces a June 27 runoff with Morgan Tsvangirai of the opposition Movement for Democratic Change (MDC).

Mugabe told supporters that Tsvangirai would turn the country back over to white control if he won the runoff.

The veterans he led in a successful effort against a government dominated by the white minority were not prepared to recognize a Tsvangirai victory, Mugabe said.

"They said they got this country through the barrel of gun, so they cannot let it go by a ballot," Mugabe said Thursday at a campaign rally in Murehwa.

Tsvangirai was arrested twice Thursday. He was released Friday, but police impounded his two campaign buses.

In the general election on March 29, the opposition won a plurality in parliament. Weeks after the election, the Zimbabwe Electoral Commission announced that Tsvangirai won a plurality against Mugabe but that he failed to get the needed majority, making a runoff necessary.

Human Rights Watch issued a report this week declaring the presidential election to be dead on arrival because of violence and intimidation by Mugabe's followers -- including war veterans - against opposition supporters.

Mugabe, at a rally in Chikomba District -- about 120 miles (200 km) south of Harare -- seemed to support that conclusion.

"These areas, where the party lost on March 29, need to be cleansed and I am confident this would be done on June 27 when we go to the polls."

Mugabe said the MDC was a party "for whites and not blacks." He also said the party was created and funded by the British.

"You saw the whites after the March elections running around thinking that they would repossess the farms," Mugabe said. "They thought they had won."

He said the opposition would not be allowed to "give it back to whites."

Police and the MDC confirmed Tendai Biti's arrest and the charges he will face.

Biti, secretary general of the MDC, was arrested when he arrived in Harare, Zimbabwe, from South Africa.

Zimbabwe's national police spokesperson Wayne Bvudzijena told CNN that Biti would be charged with treason and the communication of false information.

The treason charge relates to a document published by the MDC before the March 29 vote which, the state alleges, contains subversive statements authored by Biti.