Rape is a way of life for Darfur's women 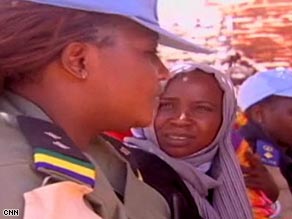 Thousands of women as young as 4 caught in the middle of the struggle between rebel forces and government-backed militias have become victims of rape, they say, with some aid groups claiming that it is being used as a weapon of ethnic cleansing.

"That is one of the biggest issues in Darfur: the rapes, and crimes against women and children," said Micheal Fryer, police commissioner of UNAMID, the United Nations peacekeeping force deployed to try to tackle the violence.

Relief workers say they are powerless to stop the attacks and say that if they do speak out, they fear that the Sudanese government will tell them to leave the country.

Humanitarian group Refugees International said in a report last year that rape was "an integral part of the pattern of violence that the government of Sudan is inflicting upon the targeted ethnic groups in Darfur."

Some relief workers say that almost every woman living in aid camps has been raped or become a victim of gender-based violence. Many teenagers, while out running errands such as collecting firewood, are raped multiple times by militiamen, the workers say.

They say the situation has now become so bad that many women are now resigned to rape as a way of life and men are unwilling to accompany them because they fear that they will be killed if they try to defend them.

But despite the extent of the abuse, the Sudanese government insists there is no problem, adding to the difficulties faced by the victims, who are often ostracized by their communities or fall afoul of a legal system seen as favoring their attackers. iReport.com: Share your photos, videos of Darfur

"There is no rape in Darfur," said Mohammad Hassan Awad, a Humanitarian Aid Commissioner for West Darfur, who accuses foreign aid workers of persuading people in refugee camps to make false claims.

Although few aid workers dispute the extent of the attacks against women, they say survivors are unwilling to come forward. But those who do reveal shocking levels of abuse.

"She said they removed their scarves and used it to tie them up and were taking turns to rape them. One is 13 years old; the other one is 16 years," Ajayi Funmi of the UNAMID police, who is trying to educate women, said after talking to two girls.

Making matters worse, aid workers say scores of babies conceived through rape are being dumped by their mothers.

"Abandoned babies are reported, but because of the stigma attached to it, there is no detailed report, because the women don't come forward," said Dr Naqib Safi of the U.N. children's body UNICEF.

With U.N. officials calling for more female officers to better educate women against rape and women saying they won't feel safe until the under-equipped and undermanned United Nations force is strong enough to protect them, the situation shows little sign of improving.

All About Darfur • Sudan • UNICEF