HARARE, Zimbabwe (CNN) -- A magistrate in Zimbabwe ruled Friday that Tendai Biti, the secretary-general of the opposition party, must face trial on charges that include treason. 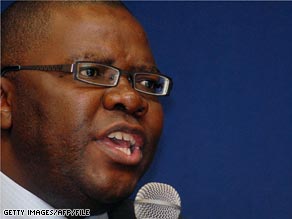 Magistrate Mishrod Guvamombe said the state had enough evidence to disclose an offense against Biti, a high-ranking member of the Movement for Democratic Change (MDC).

"After a careful perusal of the submissions by both the state and defense, there is a reasonable suspicion that the accused [Biti] committed the offense," Guvamombe said to a full courtroom.

As the magistrate read the ruling, Biti -- still wearing the red jacket he wore a day earlier -- remained motionless and only shook his head before prison guards whisked him away.

Biti's defense team has requested he be granted bail while he awaits trial. Acting Attorney General Bharat Patel was expected to decide on the request later Friday.

Biti faces four charges including treason, which carries the death penalty. The treason charge, which the MDC said was "trumped-up," stems from a document titled "The Transitional Strategy" that Biti is said to have written ahead of the March 29 election between President Robert Mugabe and MDC leader Morgan Tsvangirai.

Biti denies he wrote the document and his lawyers have described it as "doctored."

From the same document stem two other charges of causing dissatisfaction among the army and bringing the office of the president into disrepute.

The fourth charge Biti faces is communicating falsehoods prejudicial to the state by allegedly announcing that Tsvangirai had won the March presidential election by an outright majority. Results announced by the Zimbabwe Electoral Commission five weeks later indicated that while Tsvangirai had beaten Mugabe, he had failed to garner a majority.

That outcome set up a runoff election, now scheduled for June 27.

Biti denies all the charges, which the MDC calls "maliciously politically motivated." The party called for Biti's immediate release.

"The regime wants to frustrate both the internal cohesion of the MDC and its election campaign," the party said in a statement Friday. "The regime knows fully well that its time is up and is trying to postpone the inevitable -- its departure.

"Come the 27th of June we will finish this regime of thugs and warlords and usher [in] a new era of jobs, health care, education and general prosperity."

African and international leaders have criticized Biti's arrest and the treason charge, characterizing it as a ploy by supporters of Mugabe to intimidate the opposition party before the runoff. The MDC has claimed that Mugabe supporters have beat, kidnapped, arrested and killed supporters of their party.

U.S. Secretary of State Condoleezza Rice accused Mugabe on Thursday of sponsoring efforts to starve, beat and kill supporters of his opponent so he can win next week.

"Mugabe is increasing violence against [the] opposition," Rice said at the UN. "President Mugabe has squandered the promise of the very nation that was hailed as the jewel of Africa."

The MDC has accused supporters of Mugabe and his Zanu-PF party of beatings, torture, and killings, saying more than 70 MDC party members have been killed since the beginning of the three-month-long election process.